January 26, 2012
Those of us in the Diabetes Online Community have long speculated that cats are plotting world domination and that eventually they'll get the better of us.

Our cat, Shadow, has been in on that plotting for awhile.
But as it turns out, Shadow won't be around to see that World Domination come to be. Her years of cat co-plotting will go unrealized.
We said goodbye to our beloved 10-year Korat recently, her story coming to an end on Monday, Jan. 23, 2012. Also fondly referred to as "Beaner," "Mitten," "Kitty," and "The Grandcat" among other names, we are now sharing Shadow's story. 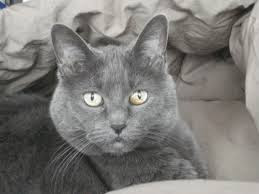 She'd been a part of our life since our first year moving to Indiana in 2004, and came to us via a copy-editor that I'd worked with at the time. Shadow had been wandering outside and apparently had experienced a near-miss by a car, and she was picked up. My co-worker sent out an email asking if anyone was interested, and I took a chance. The name came because of her grey shade, and her ability to dart around and disappear like a shadow - we kept the name. The rest is, as they say. into the history books.

We had a fun ride.

A move into our first house, complete with a "trip" down the new stairs. The dog's arrival. Visiting the Kitty Tooth Fairy. Late-night writing. Her taking on various professional jobs. Meeting the DOC and learning about world domination. Hanging out in suitcases, laundry baskets, and just being scooped up in my arms. Chasing the laser level, and the invisible mice in the house. Actually scouting one out in our apartment once, and helping me capture it. Psychedelic Frisky commercials. Jumping up on the chair arms for some petting and purring. Pump tubing on the head. Blog hijacking and blood meter stealing. But overall, no matter what else was going on, the experience of having a family and being loved.

She had been suffering from kidney disease for some time, and over the past year it's gotten progressively worse. To the point where lately, she's had difficulty breathing. Her eyes have been highly cloudy. Clumpy fur, lack of self-grooming, constant water drinking and increasing signs of dehydration. Slower-moving. Eating problems. Not wanting to play, or torment the dog. Overall, just not her same kitten mitten self. We've had her on special food and have been doing some home-medication off and on, but that had run its course and more was needed, but we just couldn't provide for her.

I've known this was coming for awhile, but I've been too afraid to truly admit it. Growing up, I was never a cat person. Always wanted a dog, and never had one, but never envisioned I'd have or even want a cat. But Shadow changed that, and it's hard to imagine my life without my first pet (childhood goldfish aside).

We took her to the vet on Monday for an evaluation, and it became clear that the time had arrived. With her history of kidney disease, the vet was somewhat amazed she'd lasted as long as she had without any more advanced problems. But she said the kidneys were small and she was on that line where any little stress could do her in. Yes, we could take her home and let nature do it's thing - but there was no degree of certainty of how much time, or what quality of life, Shadow would have left. So, we opted to save her the pain and make sure her quality of life didn't suffer more than it already had.

Decision time was upon us, and there was no sidestepping it this time (I'd been delaying this and rescheduling vet visits for awhile).

A single shot was all it was going to take, the vet said. Of course, Shadow was a fighter. She had some world domination plans left in her, and so as the vet was sticking the needle in her leg, Shadow made a dash for the door and caused the vet to pop the vein with the needle. So, a sedating shot was needed and that made her drowsy. We stayed with her for the final moments until she was gone.

It was tough. I cried. And I really, really miss my Shadow Kitten. I still look around and see her, call for her and expect to feel her nudging against my feet or poke her head up onto the footrest. I never thought I'd be a cat person, but Shadow changed that.

So now, we say goodbye to our Shadow. She'll be missed - by us, by her sister Riley, by those in the DOC who are furry and not. World Domination remains unrealized for Shadow, but I'm sure the plotting will continue with her - and so many others - in mind.

Joanne said…
Sorry to hear of Shadow's passing. I've been there and it just plain sucks. Just know that you did the right thing for her.
January 26, 2012 at 12:05 PM

Johanna B said…
Thank-you for sharing the story of your time with Shadow. I'm sorry for your loss and will pet my own elderly feline a little more firmly tonight in Shadow's memory.
January 26, 2012 at 12:35 PM

Kelly said…
What a wonderful tribute to Shadow and the life you gave her. Thinking of you today.
January 26, 2012 at 1:21 PM

NeurosurgeryNP said…
I am so sorry for your loss Mike. <3

Shara said…
I'm sorry, Mike. Pets really become part of the family and it is heartbreaking to read this. What a lucky kitty to have stumbled upon you guys, though! You gave her a great life :)
January 22, 2013 at 11:57 AM