Showing posts from June, 2013
Show all

Riding A Bike for Diabetes... If the Money Allows 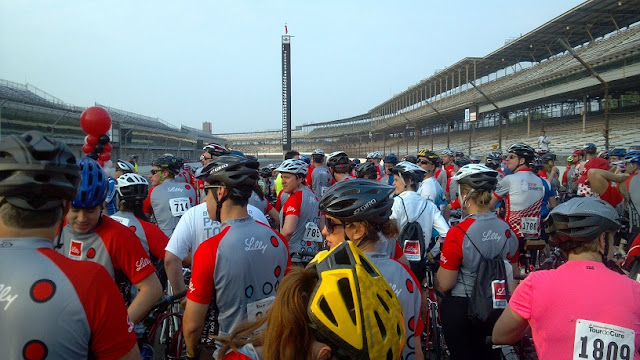 I rode in my first-ever Tour de Cure this past weekend. Our local Indiana Tour de Cure on Saturday morning took place on and around the Indianapolis Motor Speedway in Central Indiana, and I was proud to be there as a Red Rider on my inaugural ride. This was only the second ride ever here in Indy, with more than 1,400 people participating from 25 states. It's now the 11th largest Tour de Cure out of the 89 rides that take place across 44 U.S. states in total. I was psyched to be one of the 83 "declared" Red Riders in Indy proudly sporting red jerseys identifying them as PWDs (people with diabetes) -- although organizers told me there were likely other PWDs riding who just didn't go through the hoops of being recognized as a Red Rider. Anyhow, it was pretty impressive that Lilly, headquartered in Indianapolis, had more than 400 riders out there and Lilly Diabetes president Enrique Conterno gave the opening remarks that morning. I was lucky enough to have
Post a Comment
Read more

To The Hospital Coffee Shop Woman

June 12, 2013
Dear Woman Who Served Me Coffee Twice Between the Hours of 11 p.m. and 2 a.m. ( as I was staying overnight with a loved one in a Michigan hospital ): Thank you for responding to my knock knock knock on the glass door to the coffee shop, and opening the glass door at 4:12 a.m. even though you'd closed at 4 a.m. Thank you for not freaking out when I apologized for bothering you when closed, but that I was a type 1 diabetic who needed some juice. Thank you for not questioning why I didn't have more than 4 glucose tabs and a protein bar with me while staying overnight... Thanks for listening patiently as I described my plight while Low, which basically boiled down to me not wanting to risk wandering the late-night/early morning hospital wings in search of a group of vending machines that no one seemed to believe actually exist. Thank you for letting me in to grab one of the bottles of apple juice, and refusing to accept the $2 that I offered you for the $1.69 bottle of
5 comments
Read more
More posts