Showing posts from July, 2015
Show all

Low Blood Sugars, A No Hitter and the Michigan Move 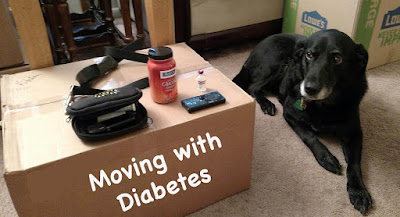 For those who weren't aware, I just made a move from Indiana back to Southeast Michigan. It's been an adventure packing everything up for the move, which just happened this past week. And I wrote about some of that fun over at DiabetesMine the other day. Photo made by me, so I'm posting it here. Since it's my Moving Day, D-Stuff, and Dog. When Moving Day arrived, I had my trusty Dexcom G4 connected along with my data-sharing CGM in the Cloud setup. You know, to keep tabs on where my blood sugars were at during this move between states. As is typically the case, the low blood sugars came at the most inconvenient time. The first was just as we were getting on the road for the 5+ hour drive (more like 7, thanks to the 20' moving truck slowing things down). Everything looked fine as we were leaving the house, as my G4 happily told me that I was part of the 100 Club with a 100 mg/dL at that moment. Like, the move was meant to be! We were all good
4 comments
Read more
More posts