Showing posts from June, 2018
Show all

The world changed for Nicole Smith-Holt when she lost her son Alec in June 2017, just a few weeks after his 26th birthday. He had been living with type 1 diabetes for two years, but the Minnesota mom learned after the fact that he'd been unable to afford his insulin, was rationing what he had, and despite the signs recognized only in hindsight, he tragically died from the effects of diabetic ketoacidosis. Now Nicole is sharing Alec's story across the world. She's spoken with small and large media outlets including People magazine, and her son's story has even prompted rock star Bret Michaels (who lives with T1D himself) to take notice and vow to do what he can to raise awareness on the crisis of skyrocketing insulin prices. Nicole is also pushing for first-of-its-kind legislation in Minnesota to curb those costs, and wants to see the same happen at the federal level. Her advocacy comes at a time when the backlash against insulin and drug pricing is hitt
Post a Comment
Read more

"Be Quiet and Leave Me Alone!" 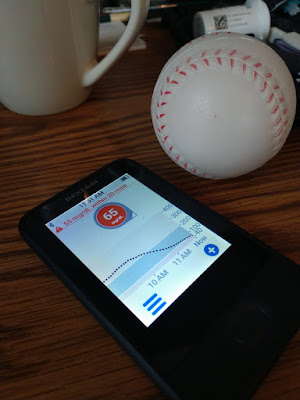 When you're going about your day and trying to juggle the stress with everything else, with a little help from your desktop baseball stress relief ball....  And your CGM suddenly screams for your attention... And you respond without hesitation: Be quiet, Asshole! Leave me alone. I don't have the time or energy right now to deal with a Low blood sugar. (((sigh))) And the moments continue to roll by, as Life is Interrupted by Diabetes once again. (((double sigh)))
1 comment
Read more
More posts