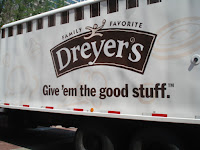 Updating what I wrote a week ago, the 22nd Annual Ice Cream Social in Indianapolis on July 8 was a huge success!

Consider this update the "official" public relations-friendly account of the vent, rather than the past post expressing my disgust at one's critic's response to the ice cream social.

Put on by the American Dairy Association of Indiana, this event on Monument Circle in downtown Indianapolis is reportedly the state's biggest ice cream social and takes place as part of National Ice Cream Month. Not to mention it happens in the Hoosier State, that produces the second-highest amount of ice cream nationwide. (Some fun ice cream tidbits can be found over at this blog, such as the history of ice cream dating back to 4 B.C.!)

For only $3, visitors could enjoy a bowl of Edy's "good stuff" light ice cream with various Smuckers toppings - including sugarfree chocolate, caramel, and strawberry.

This has been going on for more than 20 years now and this was the first of a two-year cycle where all the proceeds go to benefit the Diabetes Youth Foundation of Indiana, which supports/educates/empowers young people living with Type 1 diabetes and owns the only D-Camp in Central Indiana designed specifically for PWDs! (Disclosure: I'm a proud board member, despite my very limited exposure to a different D-Camp after my diagnosis at age 5.)

Hundreds (maybe even a thousand+) of people came out for the ice cream social on a sunny Friday with temps in the mid-80s. Great sundae-eating weather, indeed! And you know what's awesome? A total $6,403 was raised for the DYFI!!!! Totally awesome, and this can only mean some great things for our local D-Camp down the road!

More than 30 "celebrity" scoopers came out to volunteer, those being from the ranks of local media personalities and such. Face-painting and music and games were going on, along with a handful of mascots surveying the scene - McGruff the Crime Dog (who was celebrating his 31st birthday on July 8), Trooper Teddy of the Indiana State Police, Boomer of the Indiana Pacers, Rowdie of the Indy Indians baseball team, Buttercup of the American Dairy Association of Indiana, and Maxwell who represents the Indy Animal Care and Control. Oh, and the real-life Molly the Cow from Purdue Dairy Sciences in West Lafayette.

The kids and families able to be there had a blast! As did our DYFI Director and fellow Adult Type 1, Jenna Holt, seen in the photo there with Buttercup!

One cool person I had the chance to meet at the social was Mr. Norman Wilkens, who's a health care and PR consultant with decades of experience from doc offices to hospitals and more. He coordinated the social in years past, and has remained an active volunteer for the Dairy Association. But what's even more interesting is that he's the son of one of Indiana's first endos, and back in the 40s his dad helped bring about the concept of D-Camp!

Aside from that, it was just a hot day with some ice cream fun and festivities!

Personally, I indulged in a SWAG-worthy sundae with sugar free chocolate syrup on top. Sadly, some it became a melty mess in my dish as I was trying to multi-task with mingling while eating. But the 50g or so taken was very worth it, and my D-math was pretty much on the money as the rest of the day brought on some stellar BG numbers. (Until my pump site got fussy that evening... but I digress.)

They were even doing blood tests there, though I didn't get to test my hand (ha!) on that. My meter was back at the office. But as always, my pump was at the side to bolus for any ice cream that may find it's way into my system.

Not only was there ice cream enjoyment, but there was also advocacy. Some expressed concerns or interest in the fact that this ice cream event was affiliated with a diabetes-focused organization. My Loving and Supporting Spouse Suzi Q, who spent the entire morning and afternoon volunteering, reports that a few people at her tent mentioned that. Additionally, in searching for coverage on this, I found a handful of posts or comments where this came up.

The response was simple: the DYFI focuses on Type 1 diabetes, and it's simply a myth that any Person With Diabetes of any age (child or otherwise) cannot enjoy some ice cream on a hot summer day. Like most carbs and food choices, moderation is key and healthy, responsible meal choices are possible if one so chooses. After all, this isn't the Diabetes Dark Ages where that "no sugar mentality" was common.

Those of us "in the know" who actually live with diabetes clearly understand what we can and cannot eat, and the impact it has on our health both short-term and in the long run. So, stepping outside the community for a moment, I'll point to what a non-PWD says about the relationship between ice cream and diabetes:

Communications head Jenni Purcell for our dairy association here says dairy products and diabetes can work together. "Dairy is very important in a diabetic diet because milk, cheese, and yogurt have a protein that helps stabilize blood sugar." She adds that a diabetic can have a sweet treat, so why not ice cream?

Oh, that reminds me: a Certain You Know Who didn't show up, as far as anyone knows. But it's not like we could've picked this person out of a lineup if asked to. He apparently just went away. (Update: Wait, nevermind...)

Overall, we all had a great time and raised money for a great cause! More photos of the event can be found at the Dairy Association's Twitter page and hopefully soon on the group's blog! In the meantime, here's a video below to check out!

Meagan said…
How awesome!!!! Looks like a great time was had by all. Glad you got to have a big old sundae and mingle.

Crap-on-a-stick is the guy who wrote that article you linked to ignorant. And misinformed. And holier-than-thou. And a doofus. Just a little bit.

Michelle said…
Sounds like a great event! I'm sure those in attendance had a great time! Unfortunately the dip that wrote the article didn't attend and get his lesson on Type 1! It looked like a bunch of commenters on the article are helping provide this education...and I couldn't help but add my thoughts to our collective voice too! Hoping he rescinds his article and publicly apologizes to the DYFI!
July 15, 2011 at 10:42 PM

Matt McGuire said…
I am glad the event went so well it looks like people had a good time.

Sorry to see there were a few people out there that do not care enough to learn before they speak, but that article ultimately led me to find your site so there was some good from it. :)
July 16, 2011 at 1:52 PM

Hallie Addington said…
I am so glad it was a good time! I just went and left my.... rant... on his "article". I'm going to blog it, too. RIght now I need to step away and let my blood pressure return to a safe number or my head is going to EXPLODE. Dumbass. That's what I WANTED to say but felt it not appropriate. Sorry, I had to get it out.
July 19, 2011 at 10:03 PM