On The Road: Blood Sugars, Starbucks, and E-85 Fuel

June 01, 2015
These past several months have seen a lot more travel up to Michigan as we have been planning our move back to the state. Since we both have older cars, I've turned to renting some cars to save mileage.

Rental cars influence my D-travel world in small ways:
My meter case is usually within reach on the passenger seat or in my nearby briefcase or bag, so there's no need to do anything different as far as my meter's concerned.

Of course, any of these drives pretty much involve some key "need to know" points for me no matter what type of vehicle I'm driving -- gas stations, coffee spots, and locales that have Wi-Fi in case I need to tune in online and get some work done while traveling.

Usually, I plot out my blood sugar checks before I leave and for these every-few hour stops. I tend to follow the same routes, and so I've come to know where the best places are to find a Starbucks that I can either drive-through or go inside, a gas station and even some free WiFi like a Panera or Hot Spot to fire up the work laptop.

My CGM is usually with me on these drives, and so I've got the continuous stream of data flowing to the receiver that is nearby and visible -- especially when I'm wearing my Pebble Watch that has CGM in the Cloud capability, and can just keep tabs by looking at my wrist on the steering wheel. 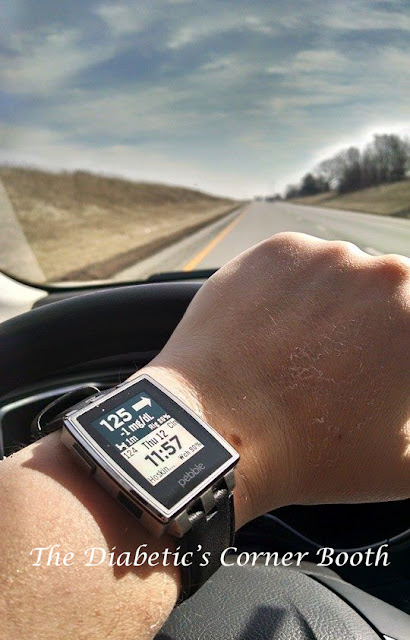 For some of these recent drives, I've managed to snag a car that needs E-85 fuel and so that's thrown a monkey wrench into my plans. These E-85 gas stations aren't all over the place, and they can be tough to find. It requires a lot more advanced planning, and I've been using an E-85 locator app or this handy site while on the road to know where the nearest fuel station is at selling this type. Unfortunately, even when I find one with that hallmark yellow pump handle, a lot of times it's out-of-order or completely empty -- have even found some of the fuel stations aren't even operating anymore.

This has made it tough to plan ahead, and as a result I've been changing up the driving routine and not stopping as consistently as I was at other locations for Starbucks, fuel, and WiFi -- meaning, it's messed with my D-management while on the road.

Seriously, if my blood sugar testing was as reliable as these E-85 locations are, I'd be screwed in knowing where my BGs are at on the road. Hell, if my insulin was dependent on the access to E-85, I'd be dead.

At least that Starbucks logo can be found on many highway signs, even they're a lot easier to find than E-85 stations that actually have fuel on tap... (although, to be honest: the Starbucks app and my Google Map sometimes lead me to non-existent coffee spots or ones that are annoyingly housed in grocery stores). But, still. Hellava lot easier to find, pretty much anywhere.

I'm just glad I don't rely on these E-85 stops to test my BGs or know where things stand. At least I'd know that if my D-management while driving was as consistent as Starbucks, I'd never stop testing because they're everywhere along the way.

OK, now that I read this whole post from the start, I realize something: There's no particular point. Except that I'm not a fan of E-85 requiring cars, and that I want to avoid renting these in the future as much as possible.

Maybe I'll just leave it with "Test, Don't Guess... Unless you're waiting for an E-85 station to fill up, and in that case you'd better Guess or just pull over to the side of the road and check, because who the hell knows when you'll have another chance."