April 20, 2015
We have been living in Indiana for a little more than 11 years now, but the time has come to move back to Michigan.

That's where we are from and it's where family is at, and once again we'll be Michiganders instead of transplant Hoosiers (btw almost a decade later, the question remains: WTF is a Hoosier?!).

We've always wanted to move back to the Metro Detroit area and that has been a plan we hoped to make happen at some point. We have flirted with the idea of a move back for years now, especially after I started working from my virtual home office about three years ago. But it was never the right time. Until now.

Actually, we reached a final decision during our awesome vacation to Michigan's Upper Peninsula last Fall and started putting the pieces into place, exploring real estate and other necessary items in order to make this happen. And here we are, ready to move back to Michigan in just a few short months.

Honestly, aside from the necessities of making sure the job-front and housing options are secure (they both are), the toughest part for me has been saying goodbye to the incredible Diabetes Community here in Central Indiana.  I've really found myself at home with the community here, and while I am excited about getting back to Michigan, it's bittersweet in that I'll have to find a new D-Community there and say goodbye to everything here -- including just being so close to the big powerhouse diabetes companies, Lilly and Roche where many D-Advocates have gathered for social media summits through the years.

And really, who can forget the Wendell Fowler Ice Cream debacle that exploded in the DOC back in 2011 after originating here in my area of Indy... ?! #TakeThatWendell

This local D-Community feels like a part of my family, and I'm sorry to say goodbye.

The move back "got real" over Easter weekend, when we told family and I also pulled the trigger on my resignation letter from the Diabetes Youth Foundation of Indiana, an org that I've been honored to be a part of as a board member during the past several years. This was really one of the toughest things I've had to do relating to this move, and I was waiting as long as possible.

Now, it feels all the more official that we're really leaving.

Our local Indy Adult D-Community is also something very close to my heart, and I've been proud to help coordinate and build this community during the past five years. We now have 100+ people connected through email and a private Facebook group, and the group continues growing with more networking and connecting with doctor's offices, educators and D-device reps in the area. I've also been proud of creating a local D-calendar that includes not just one organization's particular events, but combines all of the activities that the adult D-community might have an interest in knowing about.

Saying goodbye to this is also tough for me, because I know how easily these groups can fizzle out if the organizers or lead volunteers step away. I've often wondered about whether this could all be handed off or weaved into an existing org for infrastructure, but I've resisted that out of fear that it would taint the informal nature of these meetups. Last thing I was is for these to become clouded with a more traditional "support group" style, or with an organization trying to fund raise or push a message or have companies interfere with push sales motivations.

No, thanks. Not what this is about.

What happens next is certainly something I'm converned about, but a transition is necessary. I am hoping some of the local D-peeps will be able to pick up the reins and that is a work in progress.

With all of that being said, I'm very excited about the Southeast Michigan Diabetes Community. During the past several months, I've found myself discovering a few different D-groups online connecting the community in that area. Yet, like Indy, there really didn't seem to be one spot for the Adult D-Community to connect... so that will be something to remedy (and Facebook can help)! And it will be interesting re-discovering Metro Detroit's offerings relating to diabetes -- from endos and educators, clinical research hubs, the diabetes org chapters like ADA and JDRF, the ADA-run Camp Midicha that I went to as a kid, and just the many fellow D-peeps scattered around an area so much bigger than Indy. 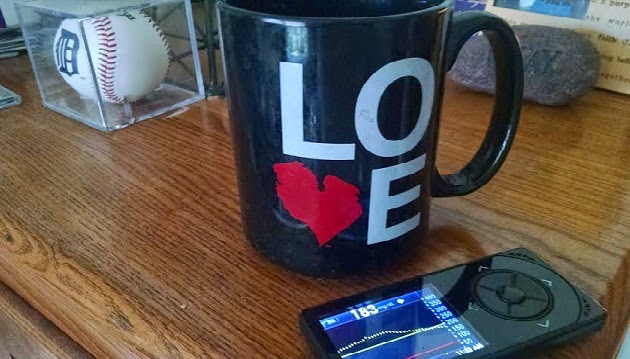 As mentioned in a recent post after the Diabetes UnConference, it all comes down to bringing that peer support and D-magic back to our own local communities -- wherever that may be. And so, I'm looking forward to it, along with all the other adventures of moving back to the place we're originally from.

Eleven years has been a long time to be away, and as exciting as this is for us, it's also scary. Because really, we're familiar with Metro Detroit because that's where we grew up, but we are very much strangers who haven't actually lived there (only visited) for more than a decade. We left Michigan when we were in our mid-20s. We were different people, and at that time I wasn't very focused on my own diabetes or the bigger D-Community. Now in 2015, that's all changed. It's great we finally have the chance to get back to our home-state and put roots down in a place we've come to appreciate so much more after being away.

See you soon, Michigan... I'm looking forward to rediscovering what the D looks like in The D!

Laddie said…
Wishing the best for you and your wife (and of course Riley) as you move back to Michigan. Life is definitely wonderful when you can be near family. Indiana's loss; Michigan's gain.
April 20, 2015 at 9:55 AM

Anonymous said…
Have a save move and all the best for the new start. I'm sure they have airports in Michigan, so no doubt we will meet again in Vegas next March. Johann
April 20, 2015 at 1:39 PM

Karen said…
Congratulations to you!! I know you're Indy D-pals will miss you, but I know you can build a great local support community in Michigan too.
May 4, 2015 at 1:53 PM