January 25, 2017
I'm no stranger to having crazy dreams that tie in with diabetes, sometimes in wicked weird and scary ways.

A number of years ago, I recall dreaming that I was buried alive in a coffin and trying to escape when suddenly, a scary hybrid-freak spider appeared -- complete with infusion set spider legs! 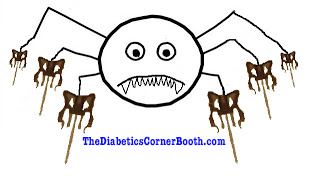 (Thanks again to Chris Sparling, a brilliant writer who has provided a number of nightmares through the years...)

Anyhow, my most recent D-dream involved what seemed at first just an every-day happening gone awry.

No memory remains of what the entirety of the dream was about, or how I ended up in the particular moment that I did. But the brunt of what I'm writing about involved me standing in front of a bathroom mirror, probably in the evening post-dinner hours. Apparently, I had eaten a salad with spinach in it with my dinner.

And as sometimes happens, a tiny little piece of that spinach snuggled itself into my gumline in my front teeth.

Well, as I stood there brushing and flossing, the spinach didn't budge. Instead, it stayed securely where it was. I used my toothbrush to target that spot specifically, and the spinach instinctively acted like a turtle and hid itself further into my gum. Almost disappearing.

I decided to just slide it out with the tip of my finger, since there apparently weren't any toothpicks in this particular dream, and that worked...

But when I removed the piece it was no longer a piece of spinach -- it was a blood test strip!!!! 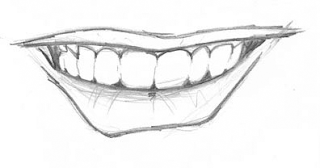 And then, I noticed other "pieces of spinach" were lodged into the roof of my gum line.

And one by one, out came the test strips.

Then I woke up.

Shuddering, with the images fresh in my mind, I went about my morning routine a bit freaked out. And now, I can't do a BG check without getting a little unnerved.

What does it all mean?

Well, I'm no dream expert, but maybe it is related to the fact that I haven't been checking by fingerstick lately and my subconscious is trying to give me a nudge? Or, it happened to coincide with the early morning Dawn Phenom hours and my BG was starting to spike? Possibly, it was related to the fact that I've procrastinated on getting a couple tooth implants for extractions done close to a year ago...?

Who the heck knows.

Maybe it's time to motivate myself to do better on checking my BGs, even when wearing my CGM. And maybe I should also go see the dentist.

Karen said…
Given how expensive test strips can be, it might not be a bad thing to be able to pull a fresh one out of your gum-line when ever you needed to check your sugar!!
January 26, 2017 at 10:31 AM