May 26, 2016
I can't even write this post without shaking my head in disbelief, wondering how such stupidity exists in this world.

That first sentence should tell you immediately that this is an insurance company related post.

Back in March, I wrote about my challenges in getting my Dexcom CGM sensors approved by Blue Care Network of Michigan. Despite my using these sensors for a few years (but never before dealing with this particular Michigan-based HMO), the insurer declined them as not medically necessary. I wrote a Letter to my Insurance Company and that was shared widely, including on the Huffington Post.

Despite telling me that an appeal would be necessary to demonstrate that I met the required criteria, BCN soon changed its mind. A BCN rep actually told me that she received a call from her higher-ups, to "look at my case" again. She did. She saw that I'd been using these Dexcom sensors already thanks to other insurance companies' approvals, and she marked it approved.

Hey, great. Only problem: I didn't actually need the sensors at that time, and my now-required medical supplier had decided to just pull the trigger on ordering these CGM sensors without my consent. So even though I now had the green light from insurance, I declined these sensors and yelled at my supplier for starting this whole process unnecessarily.

Fast forward to now. We've reached the sequel in this story.

Since that time in mid-March, my 1-year warranty has expired on my Dexcom G4 with Share receiver and I am also in need of a new six-month warranty G4 transmitter. So, in early May, I began that process to get a replacement for each of these key components. It's particularly important because I don't have any backups, and in just the past couple weeks I've noticed my receiver seems to be on the fritz.

I'm losing signals more often, the battery is losing its charge frequently, my data seems to be more inaccurate, and sometimes it won't even start charging when I plug it in.

I've been relying on Dexcom for years now, in large part due to my hypo unawareness. And with my recent push to get into better control and keep my blood sugars lower, I'm even more nervous without my Dexcom on board. So, timing is critical here.

As always, the doctor-supplier-insurer process is slow. But now I found myself facing resistance from my insurance company to approve my Dexcom Receiver and Transmitter.

At first, they denied both. Then after another call from my doctor's office during the "peer to peer" process, they signed off on the Receiver but not the Transmitter.

So, BCN, let me get this straight:

You approved the Dexcom sensors in March even though I didn't need them.

Eventually, you decided I could get a new Receiver.

But now, when I need the actual Dexcom Transmitter that make the sensors actually usable so I can see data on the Receiver, you won't approve those????

OK, BCN, let me make this simple for you to understand. If my diabetes devices were like car parts, this is basically what you're saying: 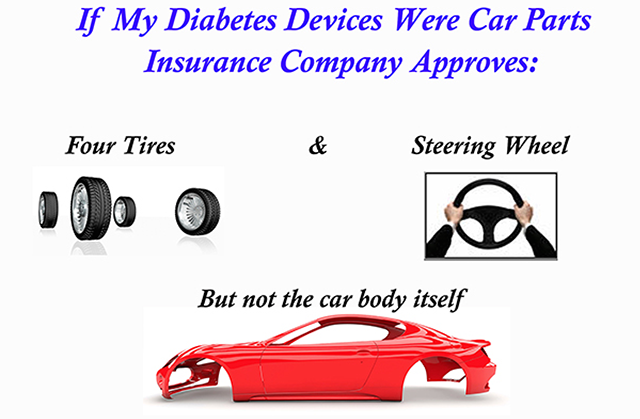 I'm sure the same could be said about an engine, that I've got all the other needed parts but in the end I can't actually make the car go anywhere.

Essentially BCN, you're saying "GO DRIVE!" but you're only allowing me access to this: 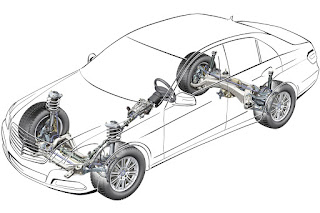 Doesn't make sense, does it?

I phoned BCN to ask for more detail. First, they rattled off reasons why it was "still pending," including the tidbit that they needed more info from my doctor's office despite his prior authorization for the Dexcom sensors in March and the insurance company's approval to pay for that. One woman said the prior Dexcom sensor OK wasn't good enough.

My mind is just exploding with how moronic this rationale is.

I asked for more specifics, but the customer service department couldn't explain any more. That would have to be explained by another department, the Care Management team. I was sent there, but a woman there told me that they could only talk to providers, not me THE PATIENT. She actually said that HIPAA prevented her from disclosing any more to me, because I wasn't the doctor.

Of course, I objected. And argued with her.

That's a violation of my federal rights, I told her. And then I launched into a rant about using her name as the basis for my soon-to-be-filed Administrative Complaint with BCN. She consulted leadership for about 10 minutes and caved on that point. Eventually, I whined loud enough that a supervisor decided to walk my case over to a department nurse to review and make a determination on it.

By day's end, my Dexcom receiver and transmitter were both approved.

Still, no one could answer my simple question about what had taken so long and why this was still pending.

I doubt they even understand why, because it's all so arbitrary. Insurance companies are designed to deny first, and apply logic later. Clearly, these people don't even understand the devices they're making important decisions about, and they're screwing with patients' health and lives in the process.

Maybe people who work at these insurance companies have a different sense of cars and transportation than I do, and that's why it seems so off the wall. Maybe they do build their own cars using the tires and steering wheel they buy separately, before they even have a car to put them on. That's the only way this makes any logical sense.

Unless, of course, you just admit the truth that the system is broken and insurance companies don't know what they're doing, and are only putting profit about patient health.

That's the only sad way this makes any sense at all.

MarytheFair said…
Glad you finally got your stuff. Went through similar bs with my insurance company. Mendacity. First they said they hadn't received the paperwork from Dexcom. 3days of back and forth phone calls with both accusing the other of lying finally resulted in a letter dated the first day I had called. Mendacity
May 26, 2016 at 12:09 PM

Rick Phillips said…
I always say the same thing. Look, I have a job and talking to insurance companies is not one of them. No that never does any good, but I like saying it. LOL