Hello From The Other Eye Docs

After all these years, we're fully established back in Michigan after more than a decade in Indiana. And with that, comes finding the new doctors -- including my trusty diabetes-focused endo Dr. G, and that ever-important eye specialist who's going to see me (!) through whatever vision and retina woes may come my way.

Making a new appointment at the start of the year and going through all the insurance referral hassle thanks to the new HMO, that appointment finally came at the end of February.

No, it's not with Adele. So sorry for that opening -- couldn't resist.

I've never been to this eye clinic before, but this doctor's name was on a list of about a dozen others given by Dr. G. Along with his eye credentials as an expert in this field, I put some faith in that. The whole appointment took about 2 hours to go through the new patient process and enter in all the info that apparently didn't transfer over from the electronic forms I'd filled out ahead of time.

And apparently, this office didn't have my files from Dr. Funky Eye back in Indiana and so they didn't have my basic eye and health history. Even though I'd made sure to fill out the required authorization forms and confirm all this had been done back in January... (sigh). 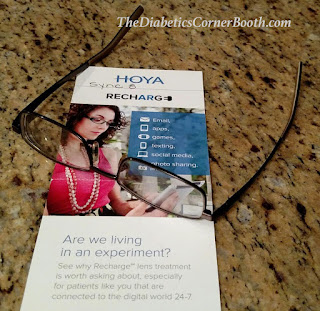 After everything, I met with Dr. Eye Glass who was able to get a look at my eye strength and figure out what I needed as far as contact lenses and new glasses. It's been about 5 years since my current pair of glasses, and she noted how it was time for a slightly stronger Rx. I also mentioned that I'd started experiencing that "Bifocal Effect" during the past couple years, and had trouble reading with my glasses or contacts without using a cheap pair of reading glasses.

She suggested I try a new high-tech lens, Sync 8. Apparently, it's aimed at younger generations or those who find themselves starting at computer screens, smartphones, TVs and all the other near and far distance things in life. They're supposed to basically be like bifocals without the traditional lines or tiered design. Dr. Eye Glass also pointed to another high-tech feature dubbed ReCharge, which reduces by 10% blue light that comes from smartphone and computer tech.

Both sounded fine by me, so that's the plan in the coming weeks - to pick out a new pair of frames and get them ordered up.

I was happy after seeing Dr. Eye Glass, and sat back in the waiting room with my eyes dilating as I waited for my new ophthalmologist. I didn't wait long.

After some initial intros, he and I delved into my record -- which didn't have much. Even though my eyes were dilated, I swear he rolled his eyes at me a few times when after my responses to questions about basic eye and health history, relating to diabetes and the diabetes retinopathy I was first diagnosed with retinopathy in 2007.

Sure, the retinopathy had never really gotten worse over the years and was always confined to the levels of "keep your blood sugars under control." Even in 2011, when it did get a bit worse than it had been before. So, I was sure that it had gotten even worse since the last time I saw Dr. Funky Eye in Fall 2014.

He shined the blue and very bright white lights into my eyes to get a peek behind the retinas, and after a minute or two, he wheeled his stool over to the desk to jot some notes into his file. Holding my breath, I could hear my heart pound as I waited to hear how much worse my retinopathy had gotten.

"Your eyes look wonderful!" he said.

And then he said nothing else. There was no "But" coming after that, it seemed...

My heart did a little dance, but I was also a bit unsure.

"You mean, it's still in check and the retinopathy isn't any worse?" I asked.

No. Actually, he didn't see any signs of retinopathy.

Hmm. OK, but how is that possible when I haven't really been doing any better D-management wise in the past year or two....

He didn't answer. There was probably an eye roll going on there, that I couldn't see. So, I decided then that his pseudo-name would be DR. EYE ROLL.

Also, he did another look into my eyeballs and Pffted -- YES, he actually Pffffftd! --- when I mentioned the optic nerve hypoplasia that Dr. Funky Eye had previously diagnosed me with back in 2009. This was when we noticed I couldn't see the lower half of anything out of my right eye, thanks to my optic nerve not being fully formed there. 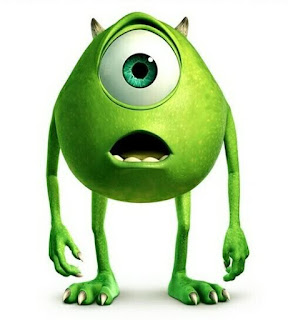 There was also no sign of that, Dr. Eye Roll told me.

We chatted, he seemed a bit rushed, but happy that my eyes were fine -- especially for someone with type 1 for 32 years. He suggested a field vision test next time, in a year from now. Even though I'm pretty confident the whole array of tests in that first 90 minutes of my appointment included those very same type of vision field tests.

At that point, my confidence in Dr. Eye Roll completely faded and I decided we may not be seeing each other again (seriously, no pun intended).

Sure, I am happy to hear no retinopathy. But I think a second opinion is warranted.

Still, I do like Dr. Eye Glass and plan to return to this clinic's optical shop to snag my new lenses. Just, I don't think Dr. Eye Roll is going to be my new Eye Guy going forward.

Unknown said…
Would love the 2nd doc but since so profoundly different, another opinion may be in order

k2 said…
I'm glad to hear about your appointment and I'm doing a happy dance at desk for you!
Dr Eye Glass & Dr. Funky Eye sound like they know what they're talking about :)
I think that you should get a second opinion for your peace of mind and because it's a smart move on your part - and every patients part. And it's not only a smart move - it's is your right ~
Keep us posted & Happy Leap Day!
k2