Trapped in a TV Show

June 22, 2015
A friend posted a question online the other day that got me thinking. 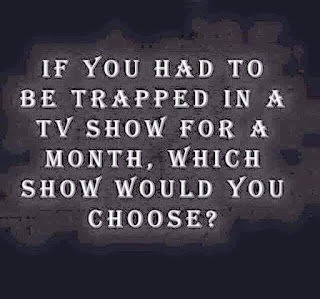 Certainly not a new question, as it's been going around online for years.

My answer: Well, it depends...

Mostly, on the rules.

Just how exactly am I going to be trapped in TV? Will this be like the movie Pleasantville, where I'm basically tossed into an existing story line but am really myself (except everyone seems to think I'm a particular character)? Maybe Quantum Leap, where I basically "leap" into other people's bodies and am confined to that reality and whatever limitations they may have (if they are a minority, or in a wheelchair, or a man or woman -- that's me for the time I'm in there)?

Or is it like Back to the Future, where I'm just plopped into some point and am just living my life as myself, except in the context of whatever show and time period we happen to be in.

These are important considerations in deciding on the show, I think. Because really, am I going to be a character or myself in that particular show? And if it's the latter, will I still be pancreatically-challenged and be living my TV character life with the additional adventure of managing diabetes?

Or do I suddenly just become a sugar normal?

The whole point about time is important, too.

While it may be fun to be transported into the world of the Brady Bunch for a month, I'd be putting myself into the late 60s and early 70s, a time when the "diabetes dark ages" was still playing out and there wasn't modern D-tech like blood meters, insulin pumps, and CGMs.

Sure, it'd be an adventure living in the world of Hell on Wheels, but then again that would be in the 1800s before insulin was discovered... so yeah, I probably wouldn't last a month.

Boardwalk Empire could be cool, but insulin was just making it on the scene, and so I'd probably be in the same boat because I wouldn't have access to this life-sustaining medication. Or I'd get knocked off by a gangster, since they were all over the place and I'd probably be in search of a good Prohibition-era beer to drink.

And that brings up an even more important big-picture rule question: What happens if I die before the month's up -- do I suddenly get pulled back to my own reality, or is my character just killed off and the show's cancelled?

That also helps me decide if other high-danger shows would be the best fit. Certainly, I wouldn't want to be on The Walking Dead, because I'd be the first to get zombified -- not even factoring in the "need to find insulin in an apocalyptic world" aspect. The same goes for Game of Thrones which is set in the medieval times, and with all the death and torture going on there, it'd be a bad month.

Probably best not to explore those kind of shows.

I really did love Burn Notice, but really I'd be a horrible spy and the danger factor is just too high even for that (assuming I'm either in that spy-group or just in danger by association). Smallville would also be interesting, and I'd certainly like to think I'd be safe by association to Clark Kent, but my luck I'd end up getting paired up with a meteor-freak or put in the crosshairs of some Lex Luthor scheme.

Maybe I'd be best to be in the world of How I Met Your Mother (before the ending episodes), which is basically this day and age and fun. A normal show, without much drama or danger... just good times, good friends, and so on.

Then again, thinking about all of this, I think my life is better than any TV show. I just need to learn to hit pause to cherish the episode a bit more at times, and maybe watch a few re-runs as I'm writing the screenplay for my future.

Scott E said…
I wouldn't mind spending a month as a patient of Dr. House, M.D. He may be an annoying, self-indulgent bastard, but he can figure out just abot any medical mystery there is...and to me, that's worth spending a month in his world.
June 22, 2015 at 8:22 PM