Reflecting On My Not-So-Inspiring Diabetes Youth

When I was growing up, I believed there were many things I couldn't do because of my type 1 diabetes.

Be a professional athlete. Fly planes. Go to the moon. Join the military. Even grow up to be a "real" news reporter out on the streets covering current events. Honestly, I never thought I'd get even get married.

All because of my diabetes.

Keep in mind, this was the 1980s and early 90s. And this was just my experience, largely based on the state of affairs at the time and what I was repeatedly told by my own medical care team. Like anything in the diabetes world, I'm sure others' experiences vary.

I remember hearing the same type of phrases at each doctor's visit: "you could get this complication or that complication." When I hit the typical teenage rebellion years and stuck my head in the sand on all things diabetes, that sentiment grew even stronger when the message became more clearly: "You ARE going to have complications or even die early."

Of course, there were also some public messages like in the movie "Steel Magnolias" that portrayed "you can't do that."

All wonderful messages you want to hear as a kid growing up... right?!

Thankfully, that has changed tremendously these days. Now we have success stories everywhere we turn — from grassroots DOC projects like You Can Do This, to the Joslin Medalist program celebrating those who've lived 25, 50, 75 or more years with type 1. We have athletes and celebrities and just regular people sharing their stories in the media and online to inspire others.

We have inspiration everywhere, and that's something that I really wish would have existed when I was younger. 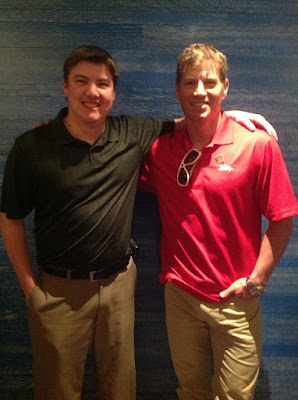 A moment at the recent 2013 Lilly Diabetes Blogger Summit in Indianapolis made me realize this more clearly than ever before. With a dozen of us from the DOC in the room, the Lilly people showed a video of how the company had been helping send Olympic cross-country skier Kris Freeman across the country to visit diabetes camps to talk with children with diabetes.

We thought the video was cool. Then, a door opened and Kris walked out into that very room! We were all pretty excited to meet him in person, and have a chance to not only hear his story face-to-face but talk with him during the rest of the day and evening.

His story is well-published: Diagnosed with type 1 at age 19 in August 2000 while training for his first Winter Olympics, Kris has gone on to win multiple U.S. and world medals and is considered a top endurance skier in the world, while also being a diabetes advocate traveling across the globe.

Later at dinner, Kris was telling us that he didn't ever think that he wouldn't be able to continue skiing as a result of his diabetes. Instead, he dealt with the diagnosis and found the treatment and lifestyle options that worked best for him to continue living his dream.

We've heard other celebs, like race car drivers Charlie Kimball and Ryan Reed, tell different stories about their initial diagnosis moments when doctors told them they couldn't do something, and at first they believed it. But not Kris. It shows how much those messages can matter.

"A little bit of adversity isn't a bad thing, Kris said. "There's no reason this disease has to stop you."

He also told us that he was inspired by other PWD-athletes who'd come before, such as Olympic swimmer Gary Hall, Jr.

At one point, D-Mom Lorraine Sisto told Kris straight up that her son Caleb, diagnosed with type 1 at 3 years old in January 2007, has always looked up to Kris. She got choked up, and told Kris that because of those types of stories and role models in our community, Caleb has not felt limited because of his diabetes. She's blogged about that, sharing how Kris sent Caleb an autographed poster with the message, "Dream big, Caleb!"

That moment struck me hard, and made me tear up and think back on all the moments in my own younger life where I did doubt myself. But how I might not have if I'd had access to the kind of peer-to-peer support and personal success stories that we do today.

Obviously, my own experiences don't translate to everyone. And my parents never did anything but encourage me. But the doctor's messages and public sentiment from such a young age did just the opposite and made me believe that I'd be living a complication-ridden life by the mid-20s that wouldn't allow me to achieve my dreams.

How does any of this matter and why was it something necessary for a pharma-hosted summit?

For me personally, it gave me a renewed perspective on how much has changed in attitude about diabetes through the years. But I also thought about how much work we still need to do, in teaching medical professionals that messages do matter — from the time of diagnosis to years down the road. Even those that are implied can make all the difference in a CWD or PWD's life.

For those diagnosed as adults, I wonder if that trend runs a similar course? The initial shock and fear of diagnosis translating to thoughts of "my life is over" or "I'll never be able to do this or continue doing this now"?

It's sad to think that many medical professionals still use scare tactics, thinking it may lead to better D-management. And those doctors are teaching newbies in the field, which just perpetuates the same negative perceptions -- even though their intentions may be good.

I appreciate having people like Kris Freeman out there telling us to blow past the limitations and we can succeed, even while dealing with all the uncertainty that comes with diabetes.

That message is so very important, because there was a time not too long ago when you never heard it.

Eventually, kids and adults with diabetes won't ever feel like they won't be able to do something because of their illness. That hope of a long, successful, fruitful life will never be squelched.

The broader message this all offers us as a community, one that we've been hearing but I think we often lose perspective on: You Can Do This.