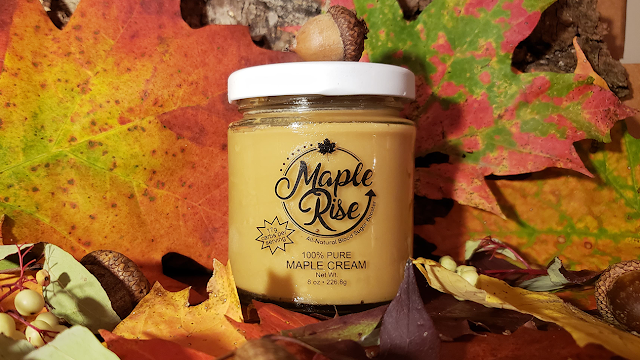 Maple syrup is an American favorite, given its North American origins and delectable sweetness, and many find it to be the perfect complement to holiday feasts. But if you live with diabetes, maple may seem taboo.

Thankfully, 20-something Darren Celley in Vermont is working to challenge that notion.

Embracing his family heritage in the maple syrup business, he is fundraising to launch a new product geared specifically toward people with diabetes (PWDs): Maple Rise, a spreadable maple butter that can raise low blood sugars quickly and more pleasantly than powdery glucose tabs, juice, or large mouthfuls of candy.

Diagnosed at age 12 in 2008, Celley is proud to be bringing a diabetes twist to the traditional concept of maple syrup and its spreadable offspring, maple cream.

What is maple cream?

Maple cream is simply whipped maple syrup, that turns out more condensed than syrup in the production process. It is heated, cooled, and then mixed until a "rich, creamy consistency is reached," Celley explains, and then it's jarred and ready to serve.

For the most part, it looks like peanut butter when it's all stirred up and ready to consume. Maple Rise is all-natural, without any additives. Just like the maple syrup and maple sugar his family makes, the only ingredient is 100-percent pure maple from Vermont, Celley notes.

Maple Rise is currently being sold in a 1/2- or full-pound jar ($12 and $20, respectively), and can be enjoyed on its own, on toast, in coffee or tea, on ice cream, as a glaze for cupcakes, or in a myriad of other ways.

The proceeds from those sales are going toward the diabetes twist on the product: New, small, portable 1-tablespoon packets of Maple Rise that Celley plans to begin marketing as a treatment for hypoglycemia (low blood sugar) in 2021.

"This product is aimed at addressing the lack of effective, durable, and health-conscious remedies for low blood sugar," he notes on the company's website.

Each pouch contains 17 grams of pure sugar for a quick glucose boost. This is the ideal amount according to the long-held "Rule of 15" for treating hypoglycemia (eat 15 grams of sugar, wait 15 minutes, check blood glucose, treat again if still low).

Given that maple cream is supposed to be refrigerated after opening, you might wonder if the packets hold up. Celley says they will last quite a while at room temperature, but for longer-term storage, packets can be kept in the freezer.

How does it work for low blood sugar?

DiabetesMine received a small sample jar of Maple Rise to try. I found that it tastes great, making me imagine warm pancakes with maple syrup. That was a nice feeling, one that I don't typically get when consuming glucose tabs or a quick orange juice.

For both of my lows, I was hovering in the 50s or 60s and consumed a heaping tablespoon that boosted me up to about 150 both times — though it took noticeably longer than the quick action I'm used to with glucose tabs or juice. I watched my blood sugars rise on my continuous glucose monitoring (CGM) graph for about an hour afterward, before leveling off and then gradually dropping as the maple cream started leaving my bloodstream.

Practically speaking, scooping it out of the jar was not ideal, because it was difficult to gauge that ideal tablespoon serving for the 17g carb count. This will, of course, be solved with the pouch format.

I also learned that maple cream separates after it sits for a bit. The dark syrup portion rises to the top, while the whipped part that resembles peanut butter settles below. This means you may need to mix it (or knead the packet) before use — which could be a downside if your low is urgent.

Outside of a low, I did enjoy some of this maple cream on a piece of toast in the morning and found that a thin layer combined with wheat toast had a very manageable impact on my glucose.

I'd certainly recommend it on taste, and the quick-grab packets, when ready, should make a nice alternative for those who might want an all-natural, delicious option to treat hypos.

A maple syrup family (plus diabetes)

Being from Vermont, the state that produces more than half of the country's maple syrup, it's no surprise that Celley has grown up with that in his veins.

His sister and brother-in-law own their own maple farm and his dad also had one before selling it. "It's one of those cultural things that most people in Vermont experience either through friends or family," he said, noting that he worked for his sister selling their syrup in Massachusetts farmer's markets while in college. And he did an internship at the farm while getting his business degree.

That was the genesis of Maple Rise, he tells DiabetesMine.

"Maple syrup was always convenient for me to use as a blood sugar booster because of how accessible it is in my area, so I would generally use that when I felt the lows," Celley says.

Growing up playing soccer, Celley remembers forcing himself to drink juice or eat a granola bar when playing sports and how that wasn't always convenient. That experience and his inside knowledge of the maple syrup industry helped him build his own business plan around maple cream.

He began forming the idea for Maple Rise and pulling it together in 2019 before launching in early 2020 — just as the COVID-19 crisis was turning into a global pandemic and turning the world upside-down.

Celley's full-time job is at a life insurance company as a data classification specialist but every other weekend he attends a local farmer's market to sell his Maple Rise and related syrup products, which include a coffee sweetener.

"I'm very fortunate to be able to work full-time from home with the pandemic still happening. (It) allows me some extra time to also focus on Maple Rise," he says. "The market debut was a success, despite happening in the middle of a pandemic. I'm excited to see where everything goes from here."

Originally published at DiabetesMine on Nov. 16, 2020