The Joy of Writing and Insatiable Learning

March 14, 2019
You never know what an early airport arrival can mean for your soul.

This happened to me earlier today, opening my eyes to a feeling that's been brewing for awhile now and blossoming into a soul-soothing and spirit-lifting revelation ripe with life perspective. Not to mention, inspiration by Bill Gates, Leonardo da Vinci, Dr. Frederick Banting, random airport strangers and paintings of famous past and present Chicagoans sketched onto glass panes at a hotel bar.

Whoa, dude -- deep thoughts! As you can see, the words are flowing and my brain is in full gym mode, mid-workout on the weights... 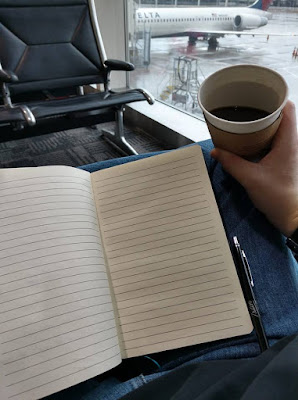 My experience began at the airport gate where I arrived an hour before my flight boarding. With a hot cup of coffee I turned to my writing tasks overflowing on my To Do list. Instead of eyeing my smartphone or opening up the MacBook to write, I opted for pen and paper. Sure, I did post on Facebook first because that's what you do in 2019, right? But that's as far as it went. Maybe it was the wide-open window view of the runways. Or maybe I was inspired by how a day earlier, both Facebook and Instagram had crashed and put masses of social media folk into a tizzy.

Whatever the motivation, here was a chance to exercise my under--utilized handwriting skills. In an actual journal.

I scribbled some notes about work and had some fun exploring different ways to write what I needed to on deadline, and then found myself drifting into other thought and jotting down observations about people arriving at the airport gate. This is a whole post in itself about those individuals, but that's for another time...

This airport experience was entertaining and relaxing, but it was only a taste of what would come once I boarded the plane and prepared for the hour-flight ahead. That's where the true inspiration, optimism, hope, and joy of writing transitioned from a creep into a full-waterfall. A smirk into unbridled laughter, if you will.

As we taxied on the runway, I found myself engulfed in a magazine article that focused on the big theme of optimism and hope. It included a whole series of vignettes by prominent folk, and one of those was legendary innovator Bill Gates who shared his belief that “innovation is an art form” that leads to optimism and hope. To get his point across, Gates wrote about his decades-long fascination with Leonardo di Vinci, describing him as a historical figure with an “insatiable learner” who was always hungry to know more. He looked at everything around him in the world, learning as much as possible and then both exploring those ideas in his head and jotting down notes in letters and sketchbooks.

A particular tidbit that Gates mentioned was a letter that Da Vinci wrote to a king in Milan, listing his many talents that included being a designer and engineer of bridges, tunnels, carriages… and at the end, that he also happened to be able to paint.

In reading this, it grabbed hold of my heart and mind and made me sit back and reflect on this as a deep thought, one that I’ve seen before throughout history. Think of Dr. Frederick Banting, who is most well-known for his idea and co-discovery of insulin – aside from that, he was a military man, a researcher on top secret government projects, and a painter himself.

History has always fascinated me, and that’s probably a big push for my falling in love with journalism way back when I was in middle school. Aside from the writing, of course. History teaches us lessons that aren’t just confined to pages of a book or posted online, they tell stories that matter and can translate into lessons in our lives now. To me, looking to history shows us what has come before us and can teach us how we might navigate the future.

It's what goes through my brain right now, as I sit here at a Chicago hotel drinking coffee, writing like there's no tomorrow as the painted faces of 22 Chicagoans watch me from above the bar. 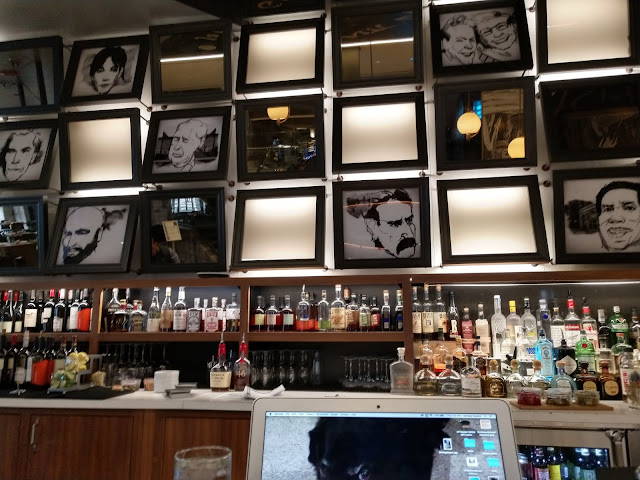 Some are obscure and some more recognizable. Studying them, I recognize roughly 8 of 22, mostly the singers and actors and writers of those featured.  And that starts leading me into another mental rabbit hole, wondering about their lives and what else these individuals may be about beyond what history largely credits them for. This sparks conversation with those around me, and in the end it all goes back to the point:

When it’s all said and done, sure many may know me as a writer. Or as a guy who talks a lot about diabetes and wears his T1D on his sleeve. But I want more than that. I want to be remembered for more than just those things that I’m very proud of. A student of life, as it were.

I want to look to the future and find hope, that the world can be better but that I can always work the muscle in my head to think of possibilities and be optimistic.

In some way, I'm thinking about it like a car.

While the point may be to get you from Point A to B, it's more than that too. Driving a car from one place to another also allows you to observe what’s in between those two spots, to explore and see the world around you. There’s an optimism and hope built into that drive, knowing that you can see the world around you and having optimism and hope that you will, in fact, get to where you’re headed.

Focus on that optimism of the drive instead of grumbling about other drivers, road conditions, gas prices, inclement weather, or sunshine reflecting in the rear-view mirror. Know that you get to explore and be a part of the world, on that particular drive on that specific route.

Otherwise, what’s the point? You might as well just leave the car parked in the garage.

So is life. And that insatiable hunger to learn, to explore.

That is what I want in my life. And in particular, in my writing. I want to write not because I have to but because I want to. So that my words can explore, challenge, inspire, ignite.

Even to explore the art of handwriting, which seems like it's becoming a lost art these days of everything-online. Writing on paper feels good. It exercises the mind. Shares as much about you as the words, from how you write to what you cross out and change, to the margins you scribble in to expand on various aspects. Words are art in themselves, as is the process of writing by hand.

And it’s through writing that I have found a place of comfort since childhood, and I aim to find that familiar place again. When you spend most of your time writing on deadlines and because it’s necessary, you can lose the joy of writing and what it meant on a base level. That’s where I’ve been hovering for some time now, seemingly treading water with my words. Rather than diving underwater to explore, splashing around, swimming out into uncharted waters to just see what’s there. There may be new words or phrases, or life experiences to write about.

Again, it comes back to that insatiable learning, that curiosity and interest to expand my horizons. To meet new people or have fresh conversations with old-friends.

Here’s to that exploration of writing and tapping into that insatiable hunger for learning. I may not be Gates, da Vinci or any of those famous Chicago folk, but we all can learn from them and act with intention to just experience and share.

This brings to mind Hamilton the Musical where we're asked (to sing): "Who tells your story?"

Here's to raising my hand to that, with pen in hand wherever that takes me.

rick Phillips said…
In sort of the words of Bob Dylan:

Scott K. Johnson said…
The simple exercise of writing is so therapeutic for me. I wish I made more space and time for it in my life. Thanks for this, Mike!
April 9, 2019 at 2:17 PM