September 10, 2017
As I've shared, I took part in a protest recently in front of the Eli Lilly headquarters in Indianapolis, aimed at drawing more attention to the serious issue of insulin pricing in America.

This was organized by the UK-based group T1international, and being a part of this was a personal one. I was wearing my personal advocacy hat here.

Roughly about three dozen of us came out to this event on Sept. 9, what will be the first in a series focused on insulin manufacturers (and hopefully others such as Pharmacy Benefit Managers that are part of the problem.

Ahead of time, I wrote out a speech. But of course, I deviated and went off script. In large part, because I was the third of three speakers and felt a decent amount just echoed what had already been said. So, I rambled on through it and left out some good chunks of what could've been said.

I'm sharing that here, to put it out there. 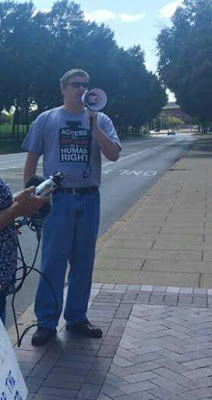 My name is Mike. I've been living with type 1 diabetes since I was five years old, more than 30 years now. I used to live here on the Southside of Indy, before moving back to Michigan a couple years ago.

And I worked downtown just a couple blocks away. So I drove by this Lilly building every morning on my way to work.

At first, I was in awe and humbled by the history it represented, since I’d been taking their insulin since I was a little kid. But over the years, it got more difficult to look at this building without feeling frustrated and angry. This was from 2006 to 2012.

Insulin prices kept going up for a single vial, not just here at Lilly but across the board.
More and more people can't afford insulin. No matter what Big Insulin says about people paying the list price or net price, 57% of people using insulin pay the actual retail cost at some point during the year. Lilly knows this first-hand.

That happened to me a couple years ago.
I have good insurance coverage now and only pay a fraction of what it would cost otherwise, but it scares me so much. Without insurance, I'd have to pay $1173 a month just to get the two different types of insulin I need to survive. That's outrageous.

I'm certainly here speaking for myself, sharing my story and how I feel about this personally. But I think we've all seen how big a crisis this is.


I think it starts with transparency.

We can’t fix a problem until we truly know what that problem is.
Let me see the data and decide for myself, just like I do for my own budgeting at home.

So many of us get frustrated when we’re told “it’s complicated,” but that’s the truth. It is complicated. But we can't stop there and let that be an excuse. The Pharma companies can't just flip a switch or push a button to lower insulin prices. But they can do better.

Someone told me recently:


"I don't see an easy solution to the insulin price issue, because we are dealing with a multi-tentacled monster on the health care front, with each tentacle attached to our wallets."

To be fair: Lilly and the other insulin companies do a lot of good in this world, including helping people out affected by the historic storms we’re seeing. But that doesn’t make up for the fact that they’re failing where it matters most --

And that's why I think Congressional action, lawsuits, media coverage and public pressure is all so important. It’s how we get to a place where we want to be: Lower insulin prices for everyone in the US.

The Assignment Help Nz said…
This website, in particular, has proven to be really beneficial to me. It includes reliable information that I and other readers will find useful. Thank you so much for your time and effort in putting this together. Because you're a natural at writing blogs like the ones I get from https://www.buyessay.org.uk/write-my-essay/, we'd like to see more real-life blogging from you in the future. I thoroughly enjoyed reading it and hope to hear from you soon.
June 3, 2022 at 3:27 AM

royalbert867 said…
This page has a wealth of information about the "Insulin Pricing Crisis". I really enjoy reading your posts, and I hope you'll continue to do so. Try using our help with management assignment to finish your homework. In the UK, we provide outstanding assignment assistance.