Visiting the Banting House, Birthplace of Insulin in Canada

On a recent vacation to Canada, I was able to visit the "birthplace of insulin," the house where insulin co-discoverer Dr. Frederick Banting lived and worked at the time when he came up with the idea that would lead to this life-saving miracle drug.

It was such a humbling experience to be able to visit the Banting House, the very place where in 1920, Dr. Banting woke up one morning at 2 a.m. and scribbled down the amazing idea that eventually saved my life and so many others. Personally, I would have died not long after my 5th birthday. But then again, my own type 1 mom wouldn't have survived past her 5th birthday, so I never would have born in the first place without Dr. Banting's revelation. Whoa!

Seriously, as a person with T1D who would most assuredly not be alive today without this discovery, being there gave me the shivers. And as a guy who appreciates history in general, I savored walking through the preserved rooms and hallways where the most revolutionary medical discovery in diabetes occurred.

As you approach the small two-story house located in London, Ontario (halfway between Windsor and both Toronto and Niagara Falls), you're greeted first by a towering statute of Dr. Banting, who was not only a doctor but a Renaissance man who was even knighted as Sir Frederick Banting by King George V in 1932.

Next you see a monument with an ever-burning Flame of Hope, dedicated by Queen Elizabeth when she visited Banting House in July 1989. It burns continuously for all people with diabetes (PWDs) worldwide until a cure is found. The idea is that when researchers eventually discover a cure, they will have the privilege of extinguishing the flame.

Banting Square also houses a giant globe, dedicated in November 1991 by the International Diabetes Federation to represent those living with D across the world. It marks the spot of a buried time capsule for the "future world without diabetes," covered by a brick-paved walkway with personalized messages of appreciation from the Diabetes Community. As of Nov. 14, World Diabetes Day (and the anniversary of Dr. Banting's birthday) in 2016, you can now buy a customized brick to add to the Banting Square walkway yourself.

And that's all before you even walk inside this historic house at 422 Adelaide Street, where Dr. Banting lived for a short time until moving his research to Toronto in July 1921. It's been converted into a museum and national historic site, as well as office space for the Canadian Diabetes Association.

More than 3,500 people visit each year, representing 80+ countries from across the globe. Clearly, most visit from the Eastern half of the United States and Canada, but Europe is next in line based on all the pins placed on a global map displayed inside (red is type 1, blue is type 2, white represents non-Ds).

Also of note: my visit was a rainy day, and ironically, the umbrella we had on hand was one with the Eli Lilly logo -- swag given out at an event years ago. In what I can only describe as Dr. Banting reaching down from the stars, through his tears over rising insulin prices and the growing insulin access crisis worldwide, that Lilly umbrella actually broke (the wind turned it inside-out, beyond repair) as we walked into the front door of the Banting House.

Inside the Banting House

Once you step indoors, you're thrown into the deep end of history.

The two-story house now contains eight galleries, covering different aspects of Banting's life and career as an artist (yes, he was actually a painter!), a general practitioner, his military service in both WWI and WWII and military research, and of course his work related to discovering insulin.

You are surrounded by old photos, news and magazine clips, replicas of awards and plaques made about Banting through the years, and even medical memorabilia such as the instruments he used, and a stained glass window of a portrait from Queen Elizabeth's visit in '89.

In total, the collection holds more than 3,500 items to date, from photos to letters and correspondence, to old-school insulin vials and diabetes supplies. My wife and I had fun chatting with the Banting House docents as well as seeing the office, including the water jug filled up with empty insulin vials -- that are often given out to elementary school students to use for history or science fairs, or just to serve as a reminder that insulin is not a cure and that huge jug full of vials represents only a "fraction of the insulin one person uses in their lifetime."

In the upstairs hallway, there's a "Faces of Diabetes" display that includes various well-known Canadian and American PWDs including celebrities like Victor Garber and Nicole Johnson. There's even a D-cat named Beth that helps educate about pets and diabetes.

Awesome museum, for sure!

I asked about Elizabeth Hughes Gossett, who was one of the first and most notable insulin recipients back in the early '20s, and interestingly, the Banting House curator says there isn't anything on display about her yet. But they aim to incorporate some of her letters in the 100th anniversary exhibit planned for 2021. Sadly, on a semi-related note: Dr. Michael Bliss, a Canadian professor and author who wrote the hailed Discovery of Insulin book, recently passed away in May.

One of the coolest parts of the Banting House -- and that's tough to say, because it's all pretty great -- is the actual bedroom where Dr. Banting was sleeping on the fateful night of Oct. 30, 1920, and awoke after midnight to an incredible idea. The bed is real, where he actually slept, and nearby they have an antique clock with the hands positioned to 2 a.m. and even a pair of spectacles on the nightstand similar to what Dr. Banting wore. 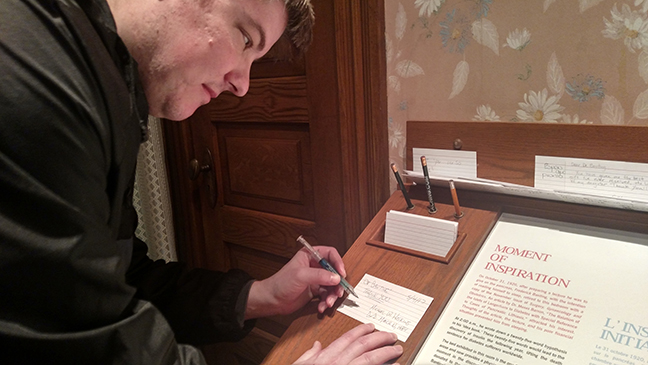 Being the nerd I am, I of course snapped photos standing over the bed and holding both my Dexcom CGM and the syringe-pen that I'd purchased for $3 to support the charitable museum. Plus I just loved the desk where you can actually write a note on a 3x5 note-card to Dr. Banting, whatever you might want to say!

OK, this was a big moment for me. Any number of thoughts ran through my brain: Sharing my story, writing a rant about unaffordable insulin costs, a message about how much I've accomplished in life and the dreams I've achieved that wouldn't be possible without insulin... in the end, a simple "THANK YOU!" was about all I could muster, aside from signing my name and including my diagnosis year.

That's what it all comes down to: a big note of gratitude for everything Dr. Banting did.

Overall, it was quite the experience, and I'd encourage anyone who has the chance to visit London, ON, to make a stop at the Banting House.

During my own visit, it was also great to meetup with local Canadian D-peep Kayla Brown, who happened to intern at Banting House at one point and snuck away from work to come say hello and snap a picture. Great seeing you again, Kayla!

Hopefully in our lifetimes, there will come a moment where the "Birthplace of Insulin" is trumped by a bigger milestone, one giving way to the Flame of Hope being extinguished once and for all.