May 15, 2017
There was a diabetes day more than a decade ago that hit me like a ton of bricks.

OK, maybe that's the first flag right there... when I said "diabetes day." As if, every single day of my life isn't a "diabetes day" where my pancreas isn't doing what it should and I must take on that role and think about everything related to a D-Life.

No, this was a particularly more-focused D-day, because I had an eye doctor appointment.

Yep, one of those dreaded doctor visits where you get bright lights beamed into your deepest eye sockets, and you try the impossible of bravely holding back the tears as you look through the whiteness as you "Look Left, Look Right, Look Up, Look Down." And then occasionally, you must face the humiliating task of trying to see tiny numbers and letters and not appear stupid, or ID the closely-colored hue book that has hidden numbers and letters, but is not easy given your partial color-blindness.

And that's just the regular stuff, aside from the ever-exciting "How are your blood sugars?" and "What was your last A1C?" questions, where I must resist the temptation to be a sarcastic asshole and just be a calm eye patient.

Nope, the real suspense of these eye doctor visits boils down the word "retinopathy." Maybe no one else does this, but I am always stressed and nervous about the end-moment where I am waiting on pins and needles for the eye doctor to tell me whether my retinopathy has gotten any worse than the last time we SAW each other (pun intended).

My first retinopathy dx'd came in early 2007 (according to what I wrote in Confessions & Complications back then).

And it was unexpected. Except for the fact, that I'd been fearing and anticipating that dx'd for most of my life since I was diagnosed with T1D at age 5.

Even though I've been anticipating that most of my life, and was ready to hear it that day, I wasn't ready. You never are.

It was about as mild as it could be, and the only advice was "keep your BGs in check," and we'll keep monitoring it. That's really been the story ever since, with little change requiring anything more than "diabetes care as it should be."

So, that's been the story ever since. I think this speaks to anything in diabetes, and well beyond into many parts of life. 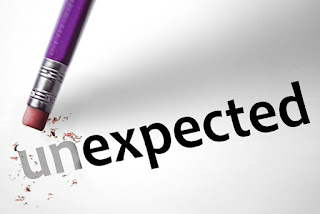 You may expect something to eventually happen, but when that time eventually comes, you just aren't ready no matter how much you've thought about it or prepared. Maybe that advanced prep will come in handy and help cope or move forward, but you can't stop the unexpected from happening. You just have to roll with the punches, and move on.

Expect the unexpected. Always hope for the best, but be ready for whatever good or not-so-good eventuality is probably going to happen.

Rick Phillips said…
Mike, when I heard that news I panicked. My first step was to find a second opinion. then to demand my annual eye exam become an every six months exam. Oh yes, I recall the day well I like you was expecting it for years and there I was like I had never heard of the issue.

how to make perfect essay said…
Hello!! When I learned that information, I became anxious. Finding a second opinion was my first step, and I next demanded that my yearly eye checkup change to a six-monthly exam. I well remember that day because, like you, I had been anticipating it for years and yet, there I was as if I had never heard of the problem. If you are a book enthusiast, I highly recommend reading this. I appreciate you sharing it with me.
June 29, 2022 at 9:43 AM

Rao Amir said…
seo agency in lahore
Get the “Real SEO Results” that other companies only promise you but can’t achieve with Top SEO agency services in, Lahore Pakistan
September 26, 2022 at 9:45 AM

Rao Amir said…
Power Sex – All-Natural Alternative to getting Long-lasting ERECTIONS.
POWER SEX is an all-natural enhancer that will help you increase your energy and performance while maintaining stamina in the bedroom.
powersex
September 27, 2022 at 11:33 PM