October 04, 2016
For the past five months, I've been unconnected to my insulin pump and have been doing daily injections and inhaled insulin to keep my blood sugars in check.

All is well on that front, and at this point I have no plans to go back to insulin pumping in the near future.

As some may remember, I've been on a pump break since mid-May -- mostly because of my need to mix it up in my diabetes management, to motivate myself to get back in gear. But also, because of my frustration and disappointment in Medtronic Diabetes and their business decision-making that I, personally, do not feel best represents the D-Community.

This is a phrase my Loving and Supporting D-Spouse uses to describe my insulin injections. Whenever I ask for her help in doing a shot in the arm, she jokes that it's time to "play darts."

No, she doesn't actually toss the needle at me.

It's just a fun term of endearment we both use, to keep the daily D-tasks more light-hearted and fun in some small way.

This isn't the first time for me "playing darts," so to speak. The first 17 years of my T1 involved daily injections, and once I began pumping in 2001 there were many times I took a short pump break for various reasons. So, this time isn't new, but it may turn into a permanent break... that's still TBD, and I'm taking it a day at a time.

At the three-month mark of "playing darts" in August, my A1C was just about the same (even though I am suspicious that A1C result and think it wasn't showing the full story).

Since then, I've been bouncing around more often on the BG front and have seen some higher BGs over the past couple months due to my own slacking. But I am happy to be experiencing less unexplained hypos, so that's one for the win box.

I am hoping that my next visit in November reflects more of my efforts in getting my A1C down to 7%. To me, the treatment choices I've made over the past several months are the best way to get to that goal. 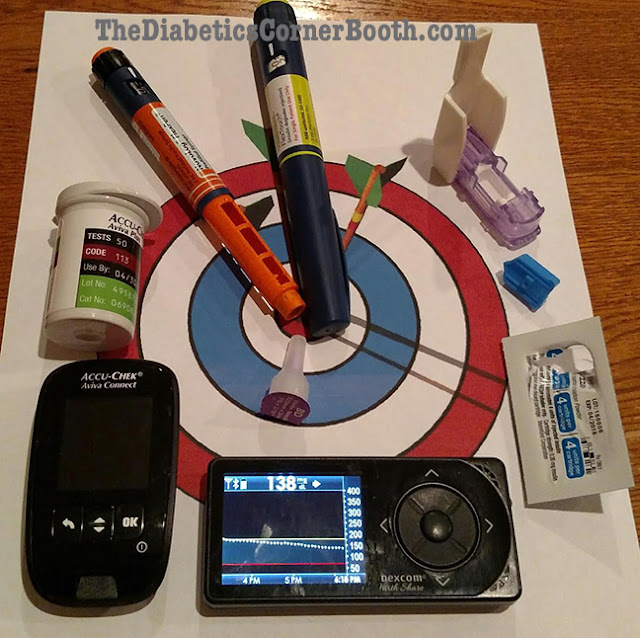 Afrezza is inhaled, but I've found over the course of a few months that it's barely effective in the evening hours for me. As a result, I turn to NovoLog fast-acting after dinner-time until the early morning hours, when I am happy to start my inhaled Afrezza as needed.

Over time, I've determined that one 4-unit cartridge is more like 2 or 3 units. But even that's not an accurate comparison, because this inhaled form doesn't work the same way as traditional insulin and it's a complete paradigm shift in getting used to its effects.

One thing I have noticed is that since mid-July (or roughly the three-month mark of starting Afrezza), it seems to be taking me more of this inhaled insulin to achieve the same fast-acting response as it did during the first three months.

I have tested this out in several ways -- with no food on board, very low carb and protein, higher "simple" carb meals, little stress and normal temps without any illnesses messing with me. Even have tried paying more attention to my inhalation technique, focusing on that "deep lung penetration" aspect to ensure I'm getting of the powder into my system properly. All of them have shown the same result: a single cartridge of Afrezza just isn't working as effectively as it once did.

Usually, within 30 minutes I can start seeing the Afrezza Effect on my CGM. At times, it may take up to an hour to reflect any meaningful change, while at other times it's noticeable within 15-20 minutes. All just depends on the day, time and most likely whether a dog wagged its tail overseas... 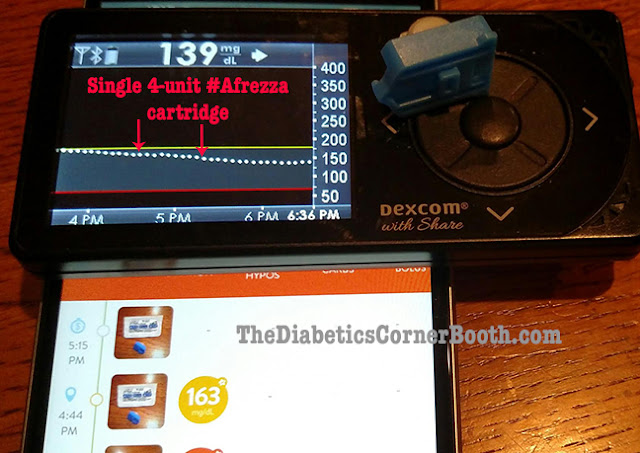 That doesn't phase me from using Afrezza most of the time, it's just one more piece of information that I use in determining what's needed to keep my D in check. If that means an 8 instead of a 4 unit, or a couple of them instead of one, so be it.

I'm happy this is part of my toolbox to manage diabetes. It's also nice that my insurance company has gotten over its hesitancy in covering this and my local pharmacy seems to have overcome its ineptitude in access Afrezza. For now, at least.

For basal insulin, I've been using Lantus twice a day.

A new basal insulin that I have just started this week may help on that front. On Tuesday morning, I began using the extra long-acting Tresiba that's supposed to last for 42 hours. This is something my doctor and I decided would be best, since I sometimes tend to miss a basal dose in the morning or evening, and because with Lantus my BGs spike on the tail-end.

So hopefully, Tresiba works better for me combined with Novolog and Afrezza.

At some point, it may be worth investigating new and exciting options in the smart insulin pen world, but that's something to explore down the road once we get into a new year... we shall see.

Whether I ever return to my Medtronic insulin pump is TBD, and despite the very exciting recent news of the first-ever Hybrid Closed Loop being approved, I do not have an interest in what the company offers at this time. Specifically for me, data-sharing is a deal-breaker and when MedT tells me that I have to use the 3+ YEAR OLD model and not the newly-designed 630G or hybrid closed loop... um, no. You lose.

More exciting is the Tandem t:slim X2 pump platform that is now available, and while I have no interest in returning to a pump right now, this is the one that temps me the most -- especially since it works with the Dexcom CGM sensor, one that I trust a lot more than the promises of any MedT tech that are still questionable to me.

With those D-tech points aside...

In the meantime, I'm happy using the darts I have and trying to hit as close to the bullseye as possible when it comes to BGs and staying in range.

Richard's Rambling Review said…
Hi mike, thanks for this blog! I played darts for 62 years, and had success by the 1990s, but there were too many bad hypos. My MedT pump and Dexcom G4 have pretty much solved that problem, but Medicare will not cover the CGM, and I will eventually have to stop using the one I have.

I understand your attitude on Medtronic. I feel the same way, but I really like my Revel pump. I have talked with the members of the Tandem T-Slim group, at length. It seems that there are times that the Dexcom transmitter does not communicate properly with the pump. that could be a problem. that was several months ago. Maybe things have improved.

I'm glad you are doing so well with the injections. I'm anxious to hear your eventual decision on choice of pump, if you do resume pumping.
October 5, 2016 at 10:05 AM