This conversation from Top Gun comes to mind:

"It's classified. I could tell you, but then I'd have to kill you."

"Lieutenant, I have Top Secret clearance."

"The Pentagon sees to it that I know more than you."


Yes, even with diabetes, some things are just Top Fucking Secret -- from others online, or even those closest to us for the time being. 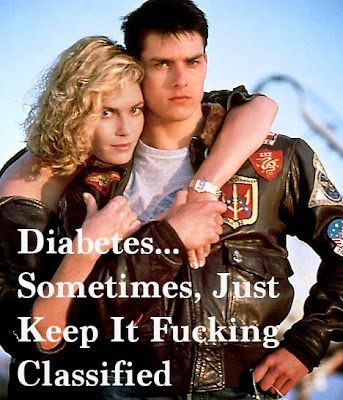 The reason is simple: It's no one else's fucking business, until I decide it is.

Because sometimes, my Diabetes is complicated. It's like I'm in a 4g-inverted dive with a Mig28, flying about two meters apart, and I'm giving my D a big "Fuck You" middle finger. Or sometimes I'm just afraid what I'm doing is going to lead to the death of my best friend and it's going to mess with my head, and so I don't share that.

All of the above and more, there are stories that don't get shared for whatever the reason. Or there are details, numbers, names, places, and so on.

I keep some things off-the-record, until some reason arises to change that. Or if there's isnt a reason, I just keep it on the DL.

I'm the same as everyone else out there, and I'd say if anyone says otherwise they're either A.) Lying, or B.) Starring a documentary about themself, starring themself, with the camera never turned away.

Only then, could that claim be made. We all keep certain things off-the-grid publicly, whether we realize it or not -- specific names, spouses, kids, addresses, diabetes numbers, whatever. We have to, because honestly there's so whack jobs out there in this online world.

So, I have no issue with keeping things classified, if needed.

Just because I blog and preach transparency, that doesn't mean you get access to everything. Especially when there are whack jobs out there exploiting info, stories, and pictures.

And that is all I'm gonna say about that.