Hey, I needed a new belt. Or two, since I actually needed both a black and brown one for my casual and more dressy outfits. So there we were, doing some holiday shopping.

On the way to the checkout counter, I glanced at my G4 receiver. It was an hour or so after dinner, and my blood sugar was shooting upwards toward 200 and beyond. All because I'd been blurry-eyed, grumpy Low and decided not to bolus for my dinner right away. And then, I had forgotten. 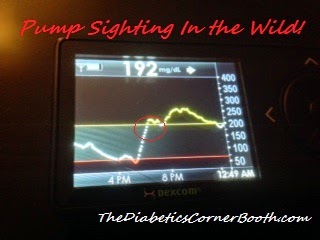 And so, it was time to bolus up.

So as we walked toward the register where we'd pay for my 2 new belts, I unholstered my Medtronic 723 pump from my belt and pushed the arrow for the overdue dinner bolus.

As a result of my distraction, Suzi took the lead at the register to pay while I finished off the bolusing. And just as I holstered my pump and felt the insulin going into my body, I heard these words come at me:

The cashier, a younger girl with blonde hair and glasses, asked me.

With that, she pulled a t:slim from underneath her shirt and proudly showed off her insulin pump that had been tucked away discretely and probably wouldn't have been noticeable had she not mentioned it or displayed it.

No, I didn't yell out #ShowMeYourPump... even though it did cross my mind. She may have no clue as to what it's all about, and the last thing I was interested in at that point was advocating or being all "in the know" as to diabetes community happenings.

Still, it was a very cool and totally random Pump Sighting in the Wild, and I'm glad she spoke up and said something. I did ask her how long she'd had the t:slim and how she liked it. Her response: About six months, and she loved it much better than the OmniPod she'd worn before that. And she said her endo was pretty excited about suggesting the Tandem device, which made me smile because I've heard how some endos do quite the opposite and push people to pumps that have had a longer life on the market.

That's all there was to it. We were done paying, and others were in line behind us waiting for Blonde Pumper and her colleague to turn attention their way. We thanked them, and moved on.

Yes, it would've been cool to chat some more and even see if she knew of any other local diabetics in the area. Or to even hand her a biz card or tell her about the Indy Adult D-Community. But I didn't, and we both went about our evenings. 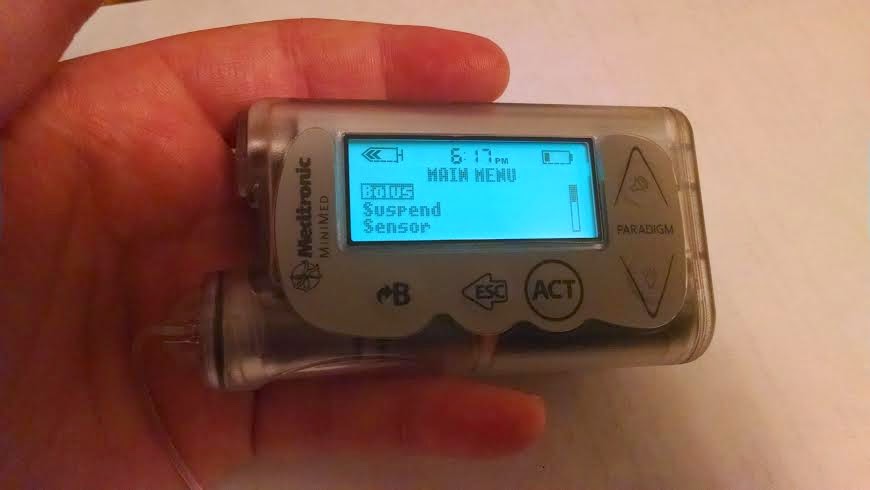 No more required, but it at least brought a smile. And a sense that I wasn't alone in my local area, even in times when diabetes isn't something I'm waving around and brandishing on my sleeve.

This time around, I was glad to have gone Low, forgotten my dinner bolus, and felt the need to give myself a bolus while walking up to buy a belt.

Karen said…
Very cool and I'm glad you had a chance to chat a bit. I also had a pump sighting over the weekend - a young girl with an Animas passed me on the street. I just stared and after she passed said "Pump, pump PUMP!!!!" but I definitely have been regretting the fact that I didn't pull my pump out and flash it as she passed.
September 4, 2014 at 10:21 AM

StephenS said…
I've been meaning to come back to this for some time. Love this interaction! Also: Can't tell you how many times I've done the same "don't bolus right now - forgot to bolus - later" thing.
September 5, 2014 at 12:01 PM