That One Time, On the Golf Course

July 23, 2014
Several years ago, a friend and I were playing golf one day. It was just the two of us and it wasn't particularly busy that morning, so we thought maybe we'd be sneak on without being paired up with another two-some.

We ended up with another two guys who weren't anything to write home about as far as golfing skill, and they seemed a little self-absorbed and unwilling to engage in just casual chat. So, we went about our golf game and maintained pleasant attitudes toward our fellow golfers.

Per my usual golfing routine I was wearing khacki pants with a tucked in polo shirt. And so, my insulin pump was clipped on to my belt as it usually is. This was a number of years ago, and at the time I wasn't wearing a CGM so my pump was the only diabetes device I had on me.

That's when it happened out of nowhere, on one of the later holes.

As I stood behind the tee watching my friend make his drive, one of the random-golfers was off studying his clubs on the golf cart while the other stood next to me quietly.

Once my friend finished at the tee, the guy next to me opened his mouth and asked a question that's since been burned into my mind. 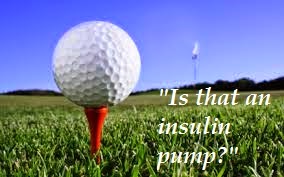 Yes, that's what he asked. Just glanced up and probably saw it clipped to my waist, and asked... his tone, from what I remember, was casual, innocent, just genuinely curious.

And how did I respond?

And that was it. Flat response, short and to the point without more than a quick glance in his direction before I turned my eyes back to the tee and walked up to take my drive. Maybe an a look that said, "leave it alone, dude, that's not what I want to be talking about today, or with you."

No clue why he was asking -- was he living with diabetes? Or had a family member, friend, or co-worker with diabetes? Did he have an insulin pump, or was he curious about getting one? Or maybe he just wanted to know more...

Whatever, the reason, I glossed over it. I had no interest in talking diabetes, and was simply out there on the course that day to play golf -- not to talk about diabetes. And so, I basically acted like an asshat to this guy asking about my pump.

I regret that now.

That moment was a big #FAIL on my part, as I see it now.

Actually, this isn't the first time I've thought about that and regretted my attitude. A few years ago, this came up during D-Blog Week when I mentioned it in this post.

But recently, Kerri wrote a post over at Sixuntilme that brought this back to mind. She wrote about "Unexpected Advocacy," how she was in that same kind of mindset when taking her daughter to the swimming pool and getting a question from someone there. Though unexpected, she ended up advocating.

That's the same point playing out now with Miss Idaho, a fellow type 1 named Sierra Sandison who decided to wear her t:slim insulin pump during the competition and (ultimately) her Miss Idaho crowning. Now, she's on the road to being the next Miss America. And through all of that, the social media campaign #ShowMeYourPump is getting mass attention and inspiring so many. Raising awareness about insulin pumps and diabetes in general, aside from giving little girls and probably many others more confidence in how they wear their own diabetes devices.

And then there's another example... a local Indy D-peep who just joined our local D-Community thanks to a friend who was at the bar and happened to be wearing his OmniPod on the arm that night. That Pod sighting made the woman's husband push her to go talk to my friend about how he liked that patch-pump, and from there he told her about the local meetups and group and encouraged her to join up. She has, and is getting a pretty great welcome from those in our local community.

It's all pretty awesome and makes me smile. But still, it makes me think back and regret even more my past Golf Course attitude once again. I really wish I could go back in time to talk more with this Golf Mate -- to at least find out the context of the question and who was asking.

We're not always in the mood to talk D, obviously. And we shouldn't have to be. Yes, sometimes we do want to #ShowMeYourPump. But sometimes we don't and that's OK. There's probably no right or wrong answer or approach, it's totally up to the individual person.

For me, I will take this train of thought with me onto all the future golf courses I play, along with coffee shops and restaurants where you never know who might be looking for a little advocacy or connection to make a difference -- even if they or you don't realize it at the time.

Scott E said…
It's not a big fail... not at all. Advocacy isn't a 24/7 obligation, it's something that you choose to do when you're in a particular state to do it well and do it comfortably. Could you imagine the conversation if it came out perceived as "forced"? It would've been terribly awkward and probably would not have left a positive or motivational impression.

Though I, too, have reflected on prior "missed opportunities," there are cases where it's just not the right time or place to talk about diabetes. This was one of them.

And who knows, if you kept up the conversation, the guy might have revealed himself to be even more of an asshat, and it would've bugged you even more.
July 25, 2014 at 8:21 AM

Karen said…
It's absolutely okay. There are just days we don't feel like interacting - about diabetes or otherwise. And after all, these guys hadn't struck up friendly conversation to begin with anyway. Don't fret over it!!
July 25, 2014 at 11:52 AM

Holly said…
Ok, now I look at asking people in a whole other light. I ALWAYS ask someone with a pump about their pump/tubing/whatever I see, hoping to make a connection. I never thought about them NOT wanting to talk about it. Crap.

I met two new girls while we were on vacation over the last two weeks. Made me want my kids to wear their pumps more visibly, I wondered if we were hindering connection!

Sorry you felt bad..I think it's your right to choose how to respond. We all need a day off..and the guys really hadn't tried to be nice before that.

There will be hundreds more opportunities and hopefully lots more golf. ; ) thanks for a different view.
July 26, 2014 at 2:35 AM

Jonah said…
Advocacy does not mean being a walking talking zoo exhibit. One of the things you should advocate is the right to keep things to yourself if that's what you feel like doing.
Being empowered socially as a minority group means (among other things) that your minority status is something you don't have to always talk about. It's okay to not feel like talking about it.
July 29, 2014 at 11:17 AM