The Name of William Hoskins

This was a couple years after finding the Diabetes Online Community, but before I really stepped into that world of wearing diabetes very openly on my sleeve. Back in late 2007 and early 2008, my focus was on my full-time newspaper job and my off-hour, stay-up-all-night hobby of aspiring family historian. This was just before Ancestry.com got a surge of new interest and a TV show brought it even more recognition, and it was something I couldn't pull myself away from.

A key motivation for this was my grandfather, William Lee Hoskins, who's been a pivotal force in my life and has always been the heart of our family. I'm proud to have William as my middle name, as does my own dad, and it's an honor to have been able to compile 20 months of intense research into a 35-page Living History that I presented to my grandpa on his 80th birthday on Oct. 8, 2009.

I found myself scouring through online records and databases, traveling back and forth to talk family history with my loved ones back in Michigan and even traveling to distant places where historical records and old cemeteries were at my fingertips. My dad and I even found ourselves digging into the dirt of a 19th century cemetery to expose hidden gravestones and snap some photos... 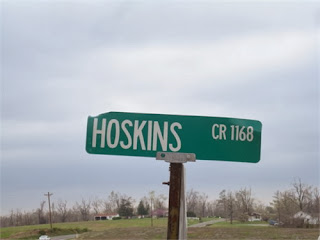 Of all the cool genealogical gems that came from that research, I'm still floored that I found in southwest Kentucky a small county road (OK, it's more like a driveway... seriously) that bears our family's name thanks to some long-ago ancestors who lived on that land.

But, the whole experience was fascinating. My grandfather loved the historic "story" that came from that, as did the rest of the family who got a copy. I'm very proud of that, and see it as one of the most personally satisfying things I've ever done.

Some of that story's already been blogged about here, in a first and second post on the origins of my Hoskins Family line and our first American immigrant named Barth (totally righteous name). But what I haven't blogged about here on The Corner Booth is how that name William became a part of the family, first embraced in the 1700s and carried on all the way to my generation.

This is a particularly important story for me to share these days, as my grandfather remains in the hospital after a nasty fall in late August. He's in a nursing home and has been on my mind a lot more lately, so I've found myself turning back to the family history story that I wrote.

Update: We lost Grandpa this very morning (Dec. 13), ironically, not long after I posted this very blog post telling the origin story of his name.

Here's more of that origin story.

I Shall Tell You of William... Hoskins

(Yes, this is a Braveheart prologue reference, for those who might have picked up on that.)

My middle name comes from the 1700s.... The Hoskins family has been around on this continent since the early 1600s, but it wasn't until the mid-18th century that the name William came around in our line. The names John and Thomas were becoming overused generally in those days and within the family, so they began turning to the name William in the early to mid 1700s.

The first William Hoskins of 1729 lived with his family in eastern Virginia before moving more West in Virginia in about 1755. They settled near Terrible Creek, a stream tributary to the Dan River just a few miles northwest of the county courthouse. This is where William kept up a long-followed family tradition and became a vestryman of the Antrim Parish and served in local government -- a Halifax County official from 1763-1770 (justice of the peace for two terms, sheriff for one term, two terms as county levies collector, and surveyor and road commissioner). He remained in that county during the American Revolution, but was also a mill owner and operator who likely grew tobacco, cotton and corn as most did at the time.

Eventually, the Hoskins family moved further West in the late 1780s or early 1790s, heading down the Holston River and through the mountains to northeast Tennessee where  many of the early settlers were heading to Jefferson County founded in June 1792. 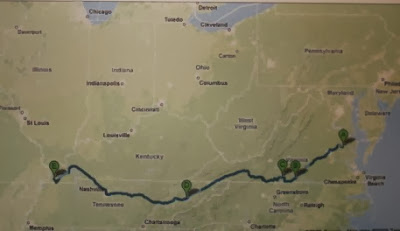 In sum, the Hoskins family had settled in the Jamestown area in pre-colonial days, staying in eastern Virginia and helping spread the ideals of democracy before we won our independence from England. A century later, the first William Hoskins took his family west to middle-lower Virginia, and then his descendents eventually journeyed west along the Holston River with thousands of other settlers to northeast Tennessee in the late 1700s. Some settlers moved to the area that became Nashville, and it appears the Hoskins eventually went that way and settled in southwest Kentucky in the 1830s and 40s along the Mississippi River, in the area of Hickman County. This area was thought to be the next national capitol following the War of 1812, when the British captured and burned Washington D.C. and the nation looked to a more land-locked location. This never materialized, but the Hoskins lines ended up there. Many other lines of Hoskins can be found in nearby counties, some connected by relatives and others only sharing a long-ago ancestor.

Lines of my family helped establish the American colonies, develop the country in its most formative and expansive years, and even introduce horse-racing into Kentucky with what eventually became the Derby.

Pretty cool, and I'm particularly proud of it! 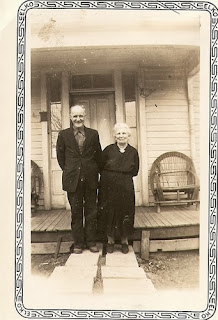 From my family's written history and actual knowledge of my grandfather, that W.O. Hoskins was the oldest generation that we have memory of actually existing. My grandpa remembers his own grandfather Will and grandma Ella Mae (Byassee), and the actual radio that she owned back in the 1930s now sits in my own home. A family heirloom, if you will.

William Oliver was a farmer in that southwest part of Kentucky and through the years he and Ella Mae had several children. One of those was my great-grandfather Raymond Oliver Hoskins who was born in 1899. That's my grandpa's dad, who was a farmer just like his father.

And from there, my grandfather William Lee Hoskins (they are from the South, remember!) came around just a few weeks before the Great Stock Market Crash of '29. He's a series of posts all his own, my grandfather, but the point here is his name that was passed on down through the generations -- from when the ancestors moved from the East to the middle part of the country, to when my grandfather and his brother left the farm-life of Kentucky in the '40s to find their futures in the emerging automotive hub of Detroit.

The name was carried on, with my dad in 1952 getting William as his own middle name and the same happening for me, the first of four grandchildren, in 1979.

The third grand-kid (my cousin Eric William Keeter) also got grandpa's name as his middle moniker. However, as I've written before, we lost my cousin more than a decade ago. So, I remain the only grandchild with his name weaved into my own.

As to my first name, no it's not taken from the Bible or anything like that. Story is my parents were torn between two names they liked - Michael and David. Apparently, my dad won and so that's what it is.

So, that's where my name comes from.

I'm very proud of my family heritage, and it's a pretty awesome feeling to know where my family came from and how we were a part of this country's beginning.

Of course, where the name came from is only the beginning of a story that can be told about my grandfather William. The rest? Will be coming soon...


Aside from Diabetes family history

Scott Strange said…
Mike, finding that much family history is pretty awesome!
December 11, 2013 at 9:32 AM

Scott S said…
You've done much better than I have. I've been afforded the luxury of laziness, with my family having already done complete genealogies on the Stone and Wilkinson sides of my family, as well as shorter histories on the other branches of the family tree. Nevertheless, I told my grandmother I would do my best to preserve this stuff and at some point, I will dedicate the time to doing it. Thanks for providing a bit of a template!
December 11, 2013 at 2:07 PM

slugmama said…
Hey There!
I found your blog while researching on my 11x GGrandfather Bartholomew Hoskins.
One of his daughters was my 10x GGrands. She married a MEADOR and on and on. I have many lines going to the 1600's in VA and up until I left VA in 1977 most of my ancestors had stayed in VA.

I'm living in PA since 1986. It's nice to meet a distant cousin who is probably 1-2 x removed since I am much older than you. lolz