August 19, 2012
You may remember my past post about the origins of my family history work started several years ago. This is a continuation of that, as part of my series publishing my past genealogy research and writing outside of the Ancestry.com world. 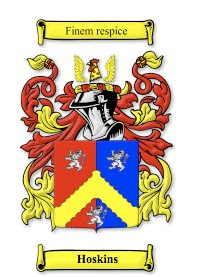 When I was tracking the name Hoskins through the generations, I had a solid line dating back to the early 1870s before there was any question. My 2nd great grandfather didn't actually ever talk about his own father, and so that's when it became unclear who was in our line from that point back. Birth, death and marriage records - along with land ownership and wills - helped connect the dots going back to 1790, when there was again uncertainty. I couldn't confirm that my ancestor apparently born that year was actually related to a line of Hoskins dating back to the Civil War days and possibly even to the pre-colonial days.

No documents seemed to exist, since the War of 1812 meant that any historical records from the areas I was searching had been long-lost... and my efforts to find any help in local areas where they were back then didn't offer any leads. It seemed I'd only be able to guess and assume...

Until a Bible page surfaced on a genealogical message board, confirming what I thought: that my family member from 1790 was indeed connected to a line of Hoskins going all the way back to 1600. The past research had all been done and confirmed by historical scholars, and all I was missing was a single generational gap that I now was able to close with a document.

This was probably the single biggest jolt of excitement I'd received during my entire family history project.

And that helped me finally be able to write this next part with confidence: I've got actual historical proof that connects me to past dozen generations in my family (!!!!)

So, without further ado...

My first immigrant ancestor, Bartholomew Hoskins, was born about 1600 in the Herefordshire area of England. He's apparently a descendent of the Lincolnshire line that goes back to the Hoskyns surname of the 1500s, who were English barristers and writers, so some historical accounts say (that English history is ongoing...)

Bartholomew was the first European to receive land in the Crown-controlled Colony, and in 1645 he received the first patent of 1,350 acres in an area that became became Tappahannock in Essex County, Virginia. There is a Hoskins Creek snaking through this area, feeding into the Rappahannock River to the east and winding several miles to the west.

Arriving in America in about 1615 (making him about 15 at the time), Bartholomew achieved in 1624 the status of “Ancient Planter” - a designation given to anyone who migrated to the Plantation of Virginia before 1616, paid their own passage, remained for three years, and survived the Jamestown Massacre of 1622 that wiped out a fourth of the colonial settlement.

Historical land patent records that I saw copies of show that Bartholomew received the first land grants in Virginia. 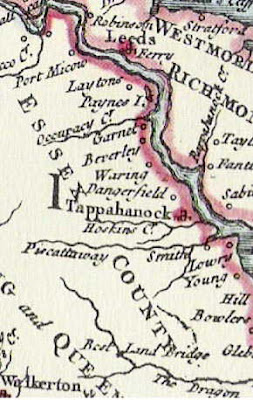 And yes, there's a Hoskins River named in his honor in Tappahannock, VA (now Essex County).

He married Dorcas Mira Isham at St. Dunstan’s Church in the Stepney area of London on July 3, 1628, and records show he traveled frequently back and forth between Virginia and London during those early years and kept a residence on Fleet Street. He died about 1663 in Elizabeth River, Lower Norfolk, Virginia.

Records show that "Barth" was a distinguished gentlemen who became a man of prominence in his community. He was among the vestrymen for the Parish of Lynnhaven, a member of the County Court and the representative for Lower Norfolk County in the House of Burgess between 1649-1656. In the book "Hoskins of Virginia and Related Families," the author writes the following about our ancestor: "He was a man of great bravery, a man of adventure, who faced many times a treacherous ocean and the dangers of a new and strange land. The evidence shows that he was very strong physically and mentally. He was a man familiar with the sea, with sailors and merchants. Bartholomew Hoskins was one of the very earliest of the colonial merchants, was in the vanguard of transporting British Civilization to the new world and a most worthy and distinguished immigrant ancestor."

His descendants would follow to become important parts of the new colony, and honoring this historic line in the Essex County Courthouse is a mounted tablet marking the impact made by Bartholomew and his descendants, some of which branch out from our particular line that ultimately moved away from this pre-colonial area.

Next up in this series: My full name is Michael William Hoskins, and we'll explore where that middle name comes from...
family history

Well researched. It seems we are cousins not to far removed. My father Charles Roy Hoskins III died recently in Tappahannock. It is great to see such interest in the family tree. Have you by chance seen the website of another of our relatives Richard Hoskins. If not you should take a look here is the URL:
http://www.richardhoskins.com/2_hr0197.htm

revreblady said…
Hello Cousin,
We have corresponded before. I believe that you are a descendant of William Hoskins. I am wondering if you have tested with any of the consumer testing sites FTDNA, AncestryDNA or 23andMe? Please contact me at revreblady@comcast.net
Regards,
Patricia
February 21, 2014 at 7:02 PM

Unknown said…
Looks like I'm a cousin also. Patricia, I did my DNA through Ancestry. Have you uploaded yours to gedmatch? And did you mean William Byrd Hoskins? born 1729?
February 15, 2015 at 2:22 PM

Unknown said…
I am also a Hoskins. My great grandmother was a Hoskins born at Midway, Essex County, VA in 1866. In fact, I am in charge of a Hoskins family reunion we hold at nearby Saint Paul's Church the second saturday in August....which has been going on for over 150 years. I grew up a stone's throw from Bruington and Mount Pleasant and would be more than happy to share local information. My email is hannah072461@yahoo.com
March 13, 2015 at 2:35 PM

Madelynn Kennebeck said…
My goodness--this is fantastic! I'm a cousin by marriage. My husband, Daniel George Kennebeck, is a descendent by way of his mother, Leatha Marie Hoskins Kennebeck. This branch of the family came to Missouri just before the Civil War. We are in the process of documenting our part of the family for admittance to the Jamestowne Society. Are any of you also members? Tell me about the DNA testing--that's the next step. We will be in the Jamestowne-Williamsberg area this summer to celebrate the family being here for 400 years. I'm so proud to be part of this special root of the country! Our e-mail accounts:
Daniel Kennebeck dgkennebeck@charter.net
Madelynn Kennebeck makennebeck@charter.net
June 16, 2015 at 5:12 PM

Natosha said…
I was born a Haskins, but the original spelling of our name appears to be Hoskins. I'm researching this line as well. Does anyone found Bartholomew Hoskins' parents? I'm trying to find where he connects to the Herefordshire Hoskyns family. His son, John, is my direct ancestor ... they ended up in Tennessee.

Steven Hoskins said…
Hello, Mr. Michael. I'd love to found out your source for Barth. Hoskins birth in Herefordshire. I'm trying to track down where he became recorded as the son of Benedicta Bourne Moyle and John Hoskins... who records cite as married in about 1602. Barth's birth ranges from 1599-1601... plus they met and married in Bath. You have different info?
August 12, 2018 at 10:54 PM