Penned in August 2007, this story appeared in our county humane society's newsletter and was written about a month after we adopted Riley and brought her home. We've now been together for five years.

Sometimes, it’s funny how a newspaper can change your life. That’s how mine took a turn for the better, paving the way for a forever family and permanent home. 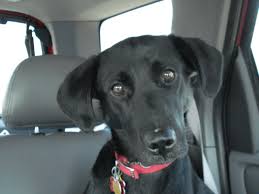 Just call me Riley. Everyone else does. In a way, the name almost reflects the uncertainty surrounding the first chapter in my life. Memories of my early days are fuzzy, but it’s tough to describe the little I remember as bad when it led me to where I am today.

They say I may have been abused as a puppy, but no one knows for sure. We don’t even know for sure when my real birthday is, though that V-E-T says I was about 1-year-old when brought home. All I know for certain is that the mysterious chapter of my life ended one fateful day when I stumbled into a Center Grove neighborhood at the tail end of 2006.

Back then, I was cold, lonely, and so scared that I didn’t even want to go around people – and everyone knows how much I love people! My typically shiny black coat was dirty, more gray than black, and I was tired and hungry and decided to take a break from wandering. There I was, standing in the road near a mailbox when she appeared. She was coming outside for her morning newspaper. Our eyes locked. Not trusting this stranger drawing close, I bolted. That didn’t stop her, and before long I learned her name was Nancy. She put a warm bed with some food on her porch for me and slowly I started going there for food and shelter.

After a while, Nancy took me in, cleaned me up, and gave me regular meals. Her grandson, who was 7 at the time, didn’t know what to call me or even if I was a boy or a girl. So he came up with Riley – because “that could be a name for a boy or a girl,” the story goes. I loved them, and the name suits me, but other pets demanded her attention and things unfortunately just didn’t work out. I’m grateful for Nancy and her husband, though, because she paved the way for me finding my forever family.

The next chapter began when Nancy took me to the Johnson County Humane Society. Soon came a foster dad – Josh. He was my go-between and took care of me for a few months. I liked it there, mostly because he had two other furry friends to play with. If I could play all day, I would be a happy dog. As much as I liked Josh’s house, it still wasn’t home. And all I wanted was a real home. Then it happened. Josh and I took a drive to the Golden Post Animal Kennel- a place I’d stayed before – for what I thought was a typical visit. But a new chapter was beginning, and for the first time, I was about to find my forever family.

Mommy and Daddy came into my life during that visit on June 25, 2007.
They tell me a story of how it was usually Mommy who’d be looking for a puppy or older dog to bring home; he wasn’t persuaded. I was different, they say. 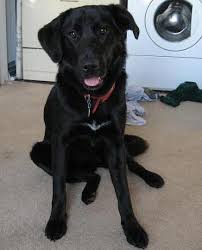 Browsing through newspaper ads in print and online one day, he stumbled across my picture and biography – much as Nancy had discovered me on the way to her newspaper that one morning. There was a connection immediately, mostly because of my shiny black coat and big, brown puppy eyes. He forwarded my good looks on to Mommy, and within a week our fates were intertwined.

He had never had a dog before, though everyone in his family had and he spent his childhood wishing to no avail. Pictures at home show that she had a dog growing up who looked just like me -but I have to say that I’m much better looking! We went home later that week when Josh took me to their house, and I could tell right away that these two would be the ones I’d always be able to play with, comfort, love and cherish.

So here we are, living in Greenwood. In my first weeks, I’ve done more with them than I can remember doing before. Have traveled to Michigan twice - a camping trip and to visit family there. We have the big, one-acre Four Paws Dog Park within our neighborhood and go there a couple times a week to run and play with friends. While they don’t yet have a fence, I’m smart enough to know to stay inside the yard and not run off. I’ve been lost before, and don’t want to go there again. Aside from that, jumping, licking, and trying to get the silvery gray cat named Shadow to like me. That’s a work in progress.

Of course, like that day I first came across Nancy’s house, newspapers are still a part of my life. We have one delivered every morning. He likes to read it for the stories inside, but it’s more sentimental for me. A newspaper brought me home. Hopefully it will do the same for others who are in need of a Forever Home.

(Ghostwritten by Michael and Susanne Hoskins)
Aside from Diabetes CatsAndDogs

Our Diabetic Warrior said…
I absolutely LOVE this!!!! I'm going to have my daughter read this. You are both beautiful writers. Is it possible to see a picture of Riley?
August 23, 2012 at 12:19 PM