June 02, 2022
Middle of the night.
My 2 AM ceiling transforms into a canvas, a lack of light creating the perfect patch of blank page for the mind to paint a masterpiece. A candle sits on the table below, the shadows of a single flame dancing on the darkened ceiling above. 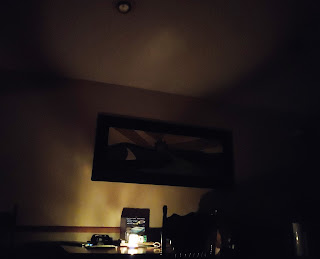 I'd never dreamed of being a firefighter. But enough television and movies portrayed the life of flames, the mystery and danger. Free, a moment away from exploding into new spaces, but caged at times.
Often, one's own human life and career could be described in much the same way.
We mostly stay in our lanes but flirt with new challenges and experience at other times, eating up the oxygen around us and crawling on the walls of our known existence. Until that new burst of energy gives us a boost to explode outside the lines, into new chapters of the canvas before us.
Above, the ceiling flame dances as the floor fan provides a soundtrack and oscillating choreography. It paints the canvas overhead, tempting my eyes with it's ever-evolving movement.
Ink options may be a shade of dark red wine, a rich amber bourbon or a golden brew hue. But no matter the color, these crayons of my mind play a key part in the masterpiece above.
The candle flame shadow wants to dance. Wants to create a picturesque scene. But the flame doesn't want to be confined to that one spot, even though it cannot escape. There is a fire inside, an inescapable desire for exploration and fiery creation elsewhere — despite the confines of the candle's glass prison. There is a stability, and yet a desire for more. A craving for more oxygen, an explosive evolution into those scenes from TV and movies we've had on display nearby.
For the candle, this isn't a Rob Lowe firefighting tale in Texas. Instead, it's a philosophical flame story of what could be, what is, and what may never be.
The flame shadow dances, nevertheless. Until the wax disappears and the candle flame burns out.
Then a new candle with a different resume and career goals takes on this new role, creating new scenes on my living room ceiling.

Rick Phillips said…
I have always believed my life was like an operatic play The hero tried to accomplish one thing. He did. That one thing was many things, most he never saw coming. Thank God.
June 5, 2022 at 10:04 PM