Escaping Technology:: No More Insulin Pumping For Me

And with that, I've made a decision: No more insulin pumping for me.

For most of this past year, I've been disconnected from my pump, which is unusual for me since I have pumped since the middle of 2001, taking only an occasional short break (or pump hiatus) over the years -- but always eventually reconnecting the device under my skin. That was even the case this past Spring when I decided to unplug, after becoming a disgruntled Medtronic customer and deciding to test the waters of Multiple Daily Dosing (MDD) once again.

But over this year's Holiday season, I've been doing a lot of reflecting on how far we've come and where we are going in this world of diabetes technology. As we start 2017, I've made a decision that we are so close to the so-called Artificial Pancreas that I am not interested in finding another device to hold me over until the AP hits the market. Hell, we're going to be at that point inside of two years, with exciting prospects that systems like Bigfoot and the iLET will be available in 2018!

That's only a year away now, and I'm completely cool with waiting until then to invest in the latest pumping tech. I'm certainly not up for a fight with with my insurance company over a new device that's only interim. (So, um, I guess new hashtag #IAMWaiting ?)

Using the combo of new Afrezza inhaled insulin and Tresiba ultra long-acting insulin has been great for me so far, so at the moment I have no real interest in changing up my D-management routine. 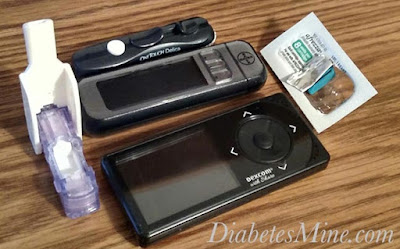 As I reported just a month or so ago, Afrezza is working really well for me. I've been trying out the 12-unit yellow cartridges over the past month, and am finding that they pack a punch; they really give my blood sugars a needed kick when I'm running very high or when I'm dealing with increased insulin resistance. As low-tech as the Afrezza dreamboat inhaler is, I'm finding it more revolutionary and life-changing for me than any insulin pump ever was.

I'm a strong believer that we need to find the best tools that work for us in any given time in our lives, and for me right now ditching certain D-technology seems best. Your Diabetes May Vary, as always.

Of course, I still have my Dexcom CGM and plan to use that unfailingly each and every day.

No way would I trade in my CGM, especially right now with the exciting development that FDA has finally given Dexcom a dosing claim; on Dec. 20, the agency voted that the Dexcom G5 is accurate enough to be used instead of fingersticks in determining insulin doses. While we still need to calibrate the CGM with a fingerstick test twice a day, we're no longer obligated to confirm results with a fingerstick every time we're ready to dose insulin.

Lots of us have already been relying on the CGM this way for a while of course, but it's great to now have the FDA on board and on par with that reality within our patient community.

And as far as glucose meters, I'm continuing to use my Bayer Contour Next meter -- a decision based not only on the fact that I have many Contour Next strips on hand thanks to end-of-the-year deductible spending, but also because I love the small, finger-sized form factor that's easy to tote around.

Once the new year hits, I plan to investigate the sexy new One Drop meter, as well as the new Ascensia Contour Next One meter that's a sleeker version of what I have now, and uses the same strips. But the latter isn't supposed to launch until some unspecified "early 2017" timeframe, so it's wait and see until then.

Consider this my final Throwback Thursday of 2016, a time when I am thrilled (if not a bit surprised) to determine that living without a pump is the best for me for the near future.