Low Blood Sugars, A No Hitter and the Michigan Move

July 30, 2015
For those who weren't aware, I just made a move from Indiana back to Southeast Michigan.

It's been an adventure packing everything up for the move, which just happened this past week. And I wrote about some of that fun over at DiabetesMine the other day.


When Moving Day arrived, I had my trusty Dexcom G4 connected along with my data-sharing CGM in the Cloud setup. You know, to keep tabs on where my blood sugars were at during this move between states.

As is typically the case, the low blood sugars came at the most inconvenient time.

The first was just as we were getting on the road for the 5+ hour drive (more like 7, thanks to the 20' moving truck slowing things down).

Everything looked fine as we were leaving the house, as my G4 happily told me that I was part of the 100 Club with a 100 mg/dL at that moment. Like, the move was meant to be! 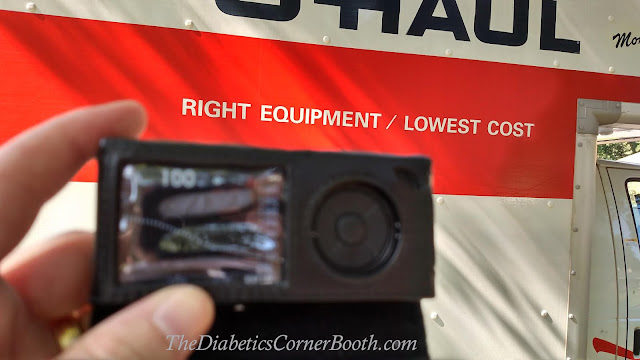 We were all good to go, and my moving truck cab was well-stocked in case of any diabetes emergencies -- with my Dexcom at my side, Nightscout on my wrist and sharing data to my wife's watch in the car behind me, plus a cracker pack and Gluco-Lift tabs in the cleverly-marketed t:slim tin. Also, had a cooler with my insulin supply and some juice. Not to mention some other goodies, all with the vacuum and flatscreen TV occupying the passenger seat next to me. 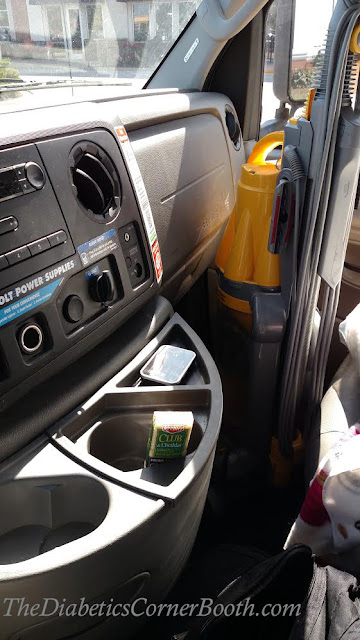 Of course, within 10 minutes as we left the neighborhood, that's when I started going Low... Figures.

It was nearly dinner-time, so before hopping on the interstate, we decided to stop for some fast-food chicken and wait the Hypo and Rebound Effect out for a bit... not to mention the early rush hour traffic.

I am happy to also point out that after treating my Low before the drive, I didn't rise above 180... a small diabetes victory sprinkled throughout all of this! Woot!!

Suzi was driving in the vehicle behind my truck, with our Riley Dog. The drive was uneventful, both generally and relating to diabetes. Made a couple stops to rest, fuel up, and let the Riley Dog just get out and burn off some dog energy. 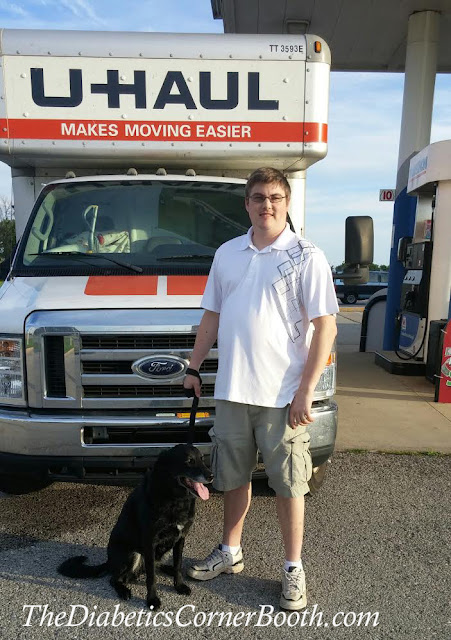 We stayed the night at the half-way mark, then finished off the move early the next morning and made it to the new house in more than enough time to start moving everything inside.

And again, Dexcom began vibrating that a Low was setting in.

This time, I swear could feel the low symptoms. But a fingerstick told me I wasn't actually Low, and I realized that I actually wasn't Low but had set my low alert to 90 for that afternoon just to make sure to catch any impending lows. It worked, and all was good!

After all the big boxes and heavy work where done for the day, I re-set my low alert back to about 70 and it made for a better BG trend for that entire day.

Our move went well, and we love the new house in Michigan! 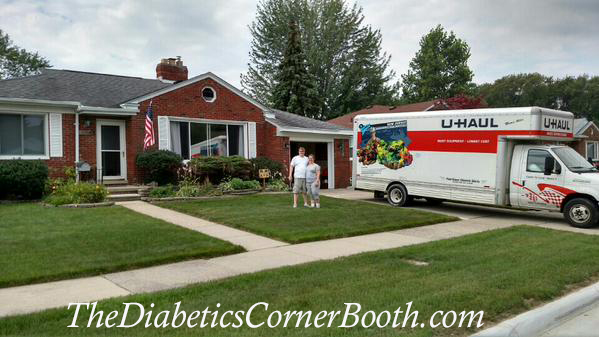 Magically, I was impressed that the new fridge actually has TWO butter compartments -- as if, it's designed for someone with diabetes to have one compartment completely for insulin, and another actually for butter or dairy. Outstanding!!! 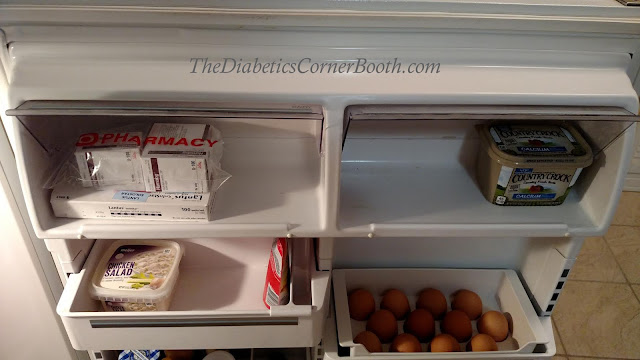 I've insisted that we need to label them, one that says "Insulin" and the other that says "Dairy." I'm told we won't be doing that, but since I work from home...

That first day, after the move-in, I was pretty impressed with how I'd managed to achieve a Michigan No-Hitter (something our Detroit Tigers haven't been able to do in far too long, btw...) Looks like moving agreed with my blood sugars! 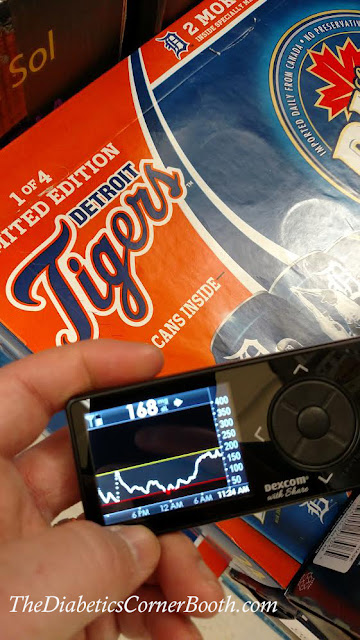 As it turned out, I had conservatively reserved a 20-foot truck and it was too small to fit everything we were moving. The movers said: "Two more feet and we could've gotten everything in there!" So, we had a small portion left in the garage to transport, and so I rented a cargo van a couple days later and made a quick trip back to Indy myself. I couldn't get the truck until Noon, and had it through the next day at that time, so half my trip was pretty much at night.

The drive was 5 hours each way, and I was at the old house for less than an hour moving in the grill, lawnmower, outdoor tools, and other items.

Blood sugars were fine, and thanks to Nightscout, I was sharing all the data with Suzi while en route.

This was a sunset captured along the interstate, on the final drive from Indy to Michigan. 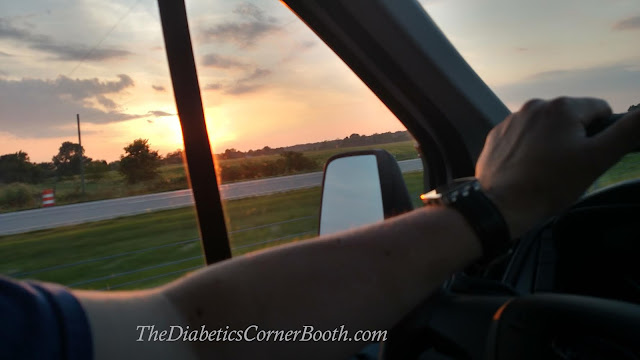 At the halfway point, roughly around midnight, Dexcom started vibrating that I was going Low. And before I knew it, we entered into the below 70 threshold. And I could feel this one, making me panic in the darkened night behind the wheel of a cargo van full of stuff.

Gluco-Lift in my pocket, but I had only grabbed a two-tab pack and that certainly wasn't enough. And I had nothing else with me to treat.

An emergency stop was needed at the nearest gas station -- and I wanted a well-lit, trusty station not a mom-and-pop place out in the middle of nowhere that was probably already closed at that hour.

It took me longer than expected, but after about 10 minutes I came across a well-lit set of stations at a major exit and made my stop. Orange juice, extra coffee, Combos to snack on.

And as I sat in the gas station parking lot in the cargo van, I could sense the gas station attendant watching me, wondering why I was still sitting there after five and ten minutes of coming inside.

It made me uncomfortable, especially since it was about 12:30 a.m.

Texted with Suzi, who was turning in for the night. Reassured her that all was OK, that I was treating my low and had enough on hand to tackle any more of those, and that I was going to wait until I hit the 100+ mark to get back on the interstate.

Two hours later: I was home, and my blood sugar was in the 300s. But I didn't care, because I was physically and mentally tired from all the moving and mental somersaults and just wanted to sleep.

So, I corrected and went to bed in my new house, ready to wake up a few hours later and continue with the unpacking along with working in my new home office. 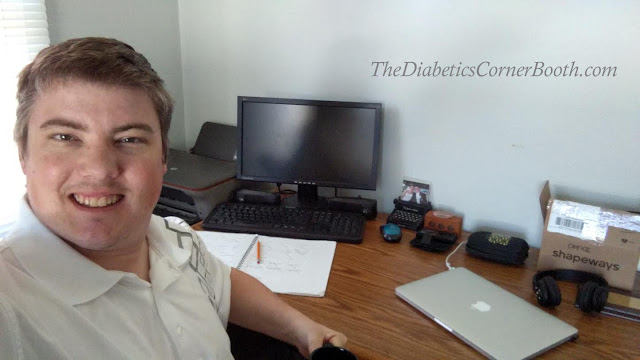 I'm excited to be back in Michigan, eleven years after we left for Indiana.

Laddie said…
So glad the move went well and you are safely in your new and beautiful home. And you're back in Big Ten country. Now that Minnesota isn't the worst football team ever anymore, I'll be taunting you during the Michigan-Minnesota game. But probably not too much because Michigan usually trounces us. Thanks for sharing the details of your move:-)
July 30, 2015 at 6:38 PM

Bouha said…
Hey Mike,
I'm Amin from https://medangel.co , and a fellow T1 :)
Wishing you a happy new year first, may 2017 bring you health, happiness and success.
I'd like to ask you if it is ok to use the photo you took of your insulin inside the refrigerator?
It would be in a presentation at a user group here in Berlin, and maybe made public on the internet.
Thanks!
January 3, 2017 at 11:24 AM