Beta Cell Bash, in the Year of the Hoverboard

March 10, 2015
Today is my 31st anniversary since my T1D diagnosis as a kid. And as I've done for the past number of years, I went to a diabetes party this past weekend. It was the Beta Cell Bash. 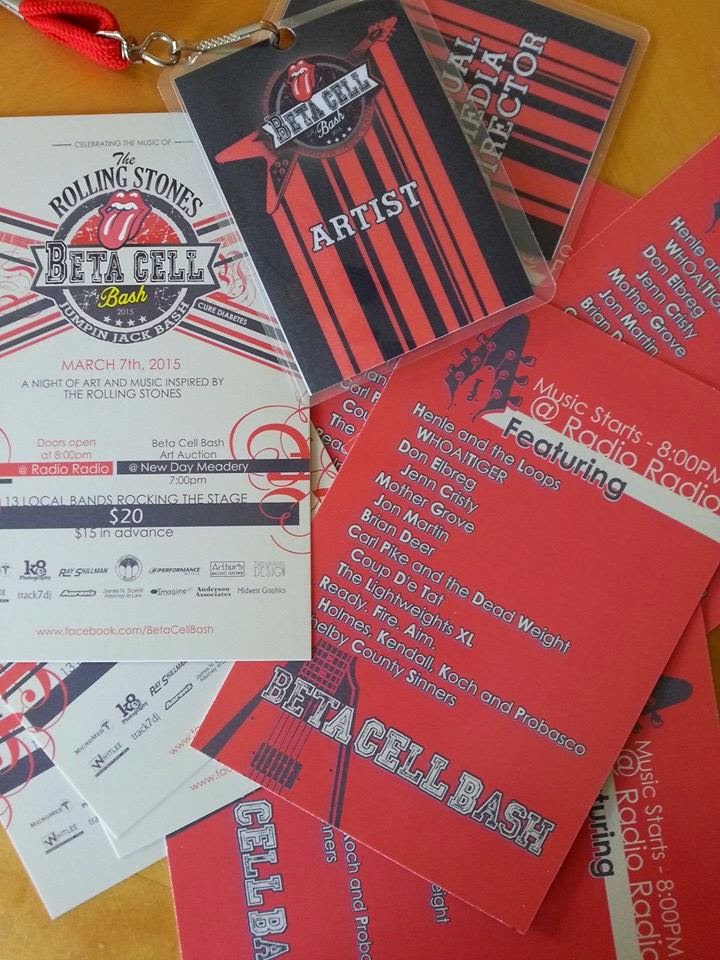 Yep, that's seriously the name of it.

Actually, it wasn't specifically to mark my diaversary. It just happened to fall at this time of year. Once again, the B-Cell Bash was a... bash.

Meeting up with other fellow pancreatically-challenged peeps is a fun experience, and this past weekend was no exception. This yearly get-together was the 4th one that I'd been to and its the brainchild of Mr. Michael Schwab, a local Indy guy who's now in his fourth decade with T1D.

Sadly. there were no sightings of hoverboards or flying DeLoreans, and Marty McFly wasn't playing his guitar anywhere near the stage. Still, it was a fantastic time.

I have no clue how many fellow people with diabetes were actually there, but I know that I saw at least a half-dozen and conversations with a number of them. Last year, we know there was a total of at least 174 years with type 1, and I'd have to guess there was at least that this year.

No matter the D-presence, we had some good beer and music, and it was a Rollings Stones theme, so each local band had to play at least one Stones tune in their mix of music.

And yes, they were selling some pretty cool "F Diabetes" shirts - so I bought one for $15, and got a free beer out of it! I met a couple who was there because of their friends, who had a young boy diagnosed a year or so ago. The D-family wasn't attending, but when these friends saw the F Diabetes shirt, they were messaging back and forth and we had some good conversation before they bought a shirt, too. Lots of good people that night! 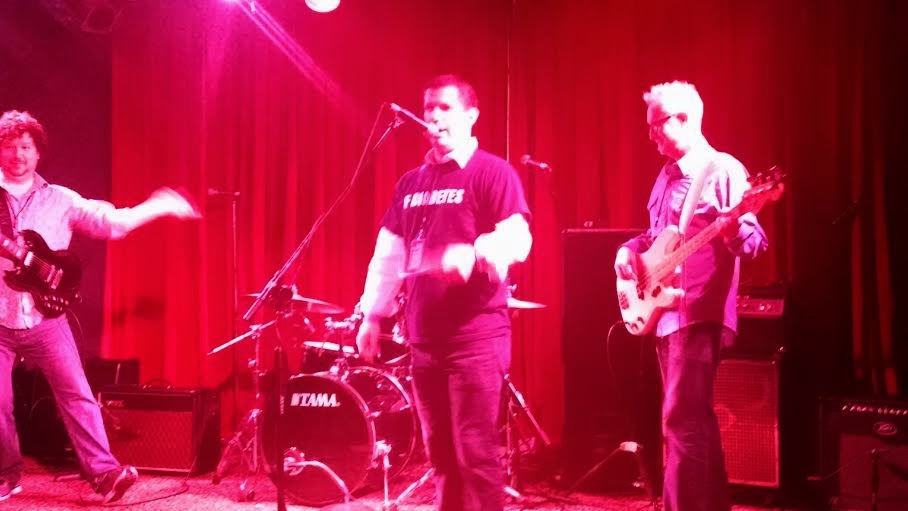 One of the guitarists introduced had a grandfather with type 1... and that just boggled my mind! How awesome it is that we're living in a time when PWDs can live to that age -- it's so great to me, and adds to the great stories of people like my friend Richard Vaughn who's almost to his 7th decade with T1D, and Dr. C. Kenneth Gorman who just received his 80-year medal. So great, and really inspires me to know that it's possible and that, yes, I can do it.

While there was a whole lot going on, one of the best parts of the night for me was the conversation. It was nice talking Dexcom with a fellow longtime T1 who's considering one for herself.

My regular receiver was connected to Nightscout (for the first time in 3 months), and with the belt case I have, the receiver isn't easily taken out of the case so I'm glad to have had a backup one connected to my G4 transmitter. That way, she could hold it and scroll through the screens for herself as we chatted about CGM options.

It was also a lot of fun for me to just sit and enjoy good conversation with another T1 friend locally, with topics ranging from anything and everything -- open-source, regulatory and R&D delay, the art of microbrews, music, diabetes camp, exercising adventures when it comes to living with D, and just general career paths. Not just diabetes, but life in general... that was refreshing, especially when it came to talking local microbreweries we've been to.

Of course, it was also fun to grab a lower-carb dinner before hand, and play with my Nightscout rig for the first time in a while. We even snapped some fun with photos... 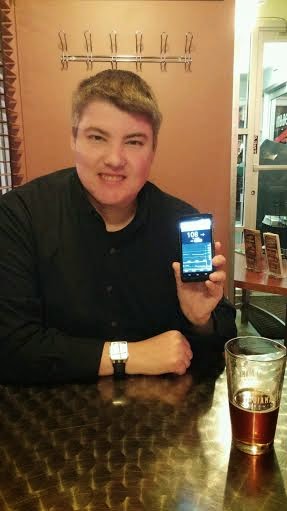 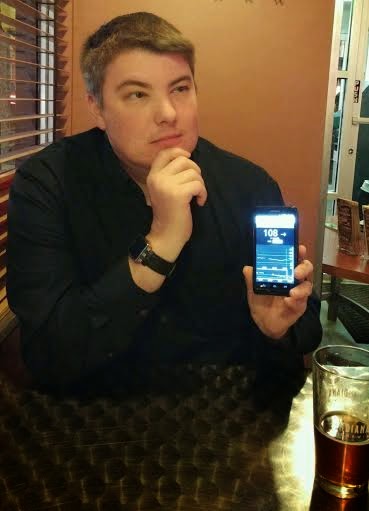 And the awesome Melissa Lee decided to have some of her own fun with my photo posted on the CGM in the Cloud group on Facebook, and it had me rolling on the floor... oh, hell: ROFL. 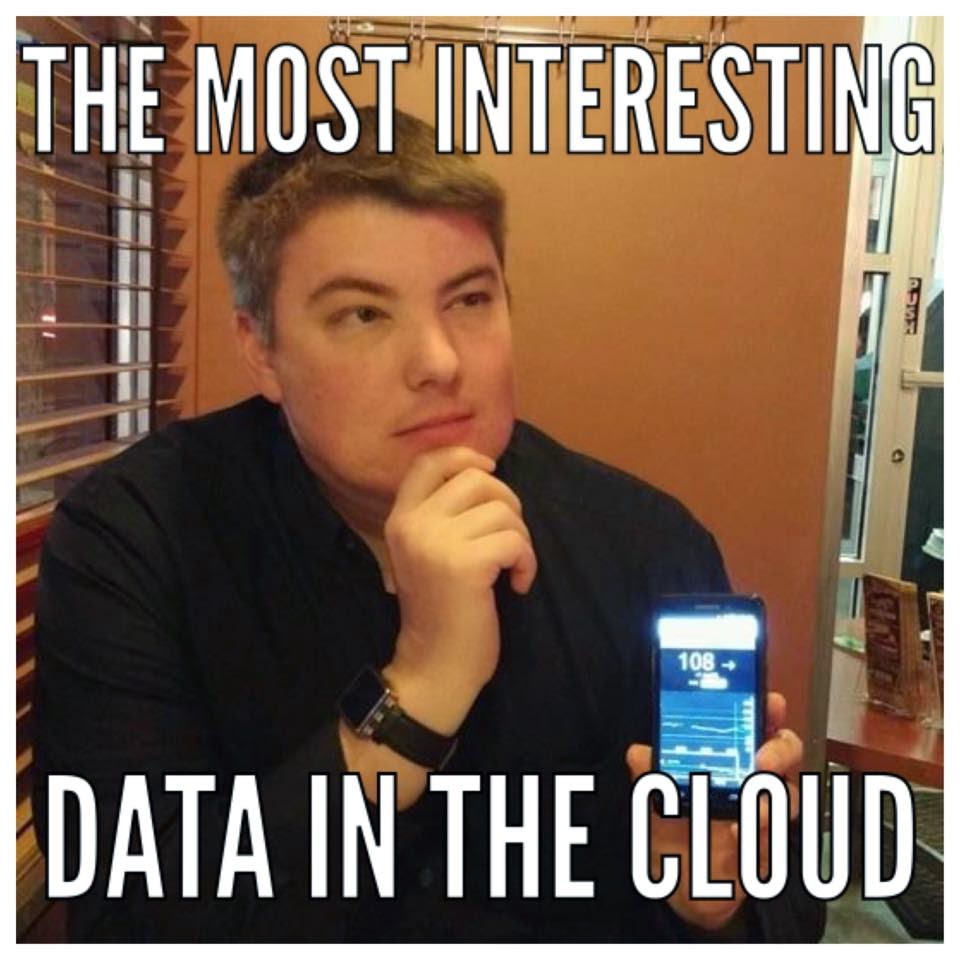 Oh, the fun we can have with diabetes...

(btw, today's #dblogcheck day and so I'm looking forward to reading and commenting on a number of different blogs from peeps in the DOC... and hearing from you! Follow all the hashtag-using posts here!)

Karen said…
Happy Diaversary!!! Always so cool that it falls in line with the Beta Bash. Sounds like the perfect way to celebrate.
March 10, 2015 at 9:09 AM

Anonymous said…
Happy Diaversary and thanks so much for sharing the fun post. I've never heard of an event like this but it sounds awesome!
March 10, 2015 at 9:51 AM

Laddie said…
It's always nice to see your personal side on this blog as opposed to your professional side on DM. Either way, your a great writer. Sounds like you had a fun evening.

Alex C said…
Happy Diaversary! I'm always terrified to let anyone else get their hands on my diabetes things. Perhaps it would be different if my CGM and pump weren't one and the same.
March 10, 2015 at 11:42 AM

Rhonda B said…
I wonder if people who were Dx'd as kids are more likely to "celebrate" diaversaries than people who were Dx'd as adults? (Your celebrations sound awesomely fun, by the way!) Being Dx'd at 21, I never even thought of celebrating the day I was diagnosed until I saw anecdotes about it on blogs, etc online. Just another random survey I'd like to do sometime! #dblogcheck! :)
March 10, 2015 at 2:51 PM

Mike Hoskins said…
Thanks, all! Hey Rhonda -- I didn't start marking my diaversaries until finding the DOC and seeing that some actually did that. Seemed very strange at first, but then I started thinking of it like my "victory" of being able to make it through another year. So, that's kind of how I started looking at it.
March 10, 2015 at 2:54 PM

Judi said…
Wasn't I one of the first to post when you started this blog? Here I am still hanging around & still reading everything you write. Almost to my 57th diaversary, diagnosed as a child, and haven't celebrated it once.
March 10, 2015 at 3:32 PM

StephenS said…
Dude, that is the most interesting photo in the world! Sorry I couldn't get to this until today, but you are a super advocate, and I'm super grateful for this blog and for what you do for all of us. Don't stop. Thanks!
March 11, 2015 at 9:32 AM