I Am Not A Diabetes Jedi

It was a usual morning, with stress and work levels being lower and more managed than they had been during recent days. I was quite productive, and was happy with how the day was moving along at that point.

But looking down at my desk, two things occurred to me:

1. My coffee cup was nearly empty.

2. I needed to do a blood test, because it had been a while (and I wasn't wearing my Dexcom).

At that moment, I didn't feel like standing up or even moving my arm across the length of the desk to grab my USB meter, stab my finger and check my sugar. I was just feeling lazy, or too comfy in my office chair to disrupt the flow of things.

"Maybe.... I can just will it to show me a number. And maybe the coffee will refill all by itself."

I waited, and neither happened.

(Upon reflection: This was probably more me weighing the need for both, rather than actually hoping something Jedi-like would happen here...)

Sighing, I reluctantly grabbed my meter and stuck a strip in.

Even though I was fine with doing a blood sugar check while sitting at my desk, that wasn't going to solve my coffee problem.

The Riley Dog was nearby, resting behind my desk on her floor pillow. I eyed her, hoping to pursuade her with my mind to go fetch me more coffee.

Sadly, that didn't work either.

I sighed, turning my attention back to my blood test by poking my finger and applying the blood to the end of the strip.

Unfortauntely, I had waited too long. The Jedi Mind Trick failed, but enough time had passed that the meter had shut off automatically -- meaning my blood drop and strip were both worless. 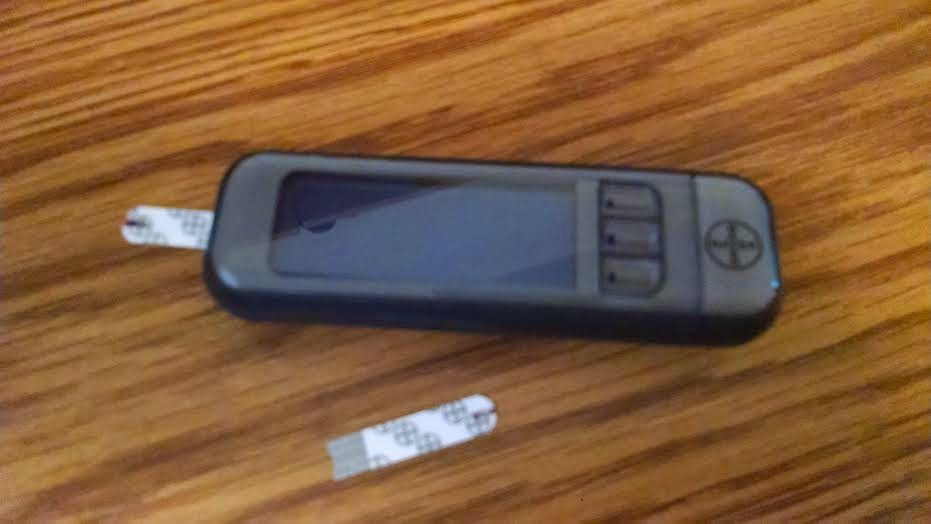 This woke the dog up, scaring her and making her come cower on the floor next to me.

A second test strip, new finger stab and drop of blood, and a 278 mg/dL.

This whole morning experience took less than 10 minutes, and I'm not even sure why it annoyed me (see: I was being lazy), but it just rubbed me the wrong way in that moment.

Yet, life went on. And I went to refill my own coffee, to get my chi back on.

Oh, and then 15 minutes later, I remembered to actually push the insulin pump buttons since apparently my telekenis was still not working.

Damn diabetes... It's always the little things that get to you, even when they shouldn't.

Karen said…
Oh if only we COULD be diabetes jedis - that would make things easier. And yeah, I haven't been able to teach K.C. to make me coffee either. But I do keep trying to will her to do it!
February 17, 2015 at 7:21 AM