We All Live in Glass Houses, But Are We Really Throwing Stones?

August 05, 2013
Let's start out with a couple catchy-quotes we all know and love.

"Those who live in glass houses, shouldn't throw stones."

Only if you can tell whether someone's actually judging you or not. And that's not always easy, thanks to the simple little fact that we are made the way we are. 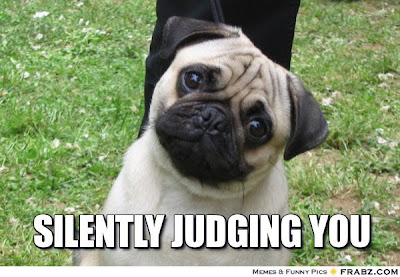 A few people I know wrote some blogs recently that got me thinking about the human condition, and specifically the topic of how quickly we judge and point fingers in today's society.

One post that caught my eye comes from Renza over in Australia, and she wrote about how so many doctors judge their patients who aren't following directions and doing what they're supposed to. Her point: leave that judgement at the door, and just realize that we don't want your judgement. That's not going to make us any healthier, or get us closer to wanting to listen to you.

First off, I agree with her. To an extent.

But once I started pondering the post a little more and mulling it over with a cup of coffee (and some wine late in the day), it really got me thinking about another side of the issue.


Really, it comes down to whether we're being "judgmental" or "holding someone accountable." The post really made me look at the differences between judging someone, and raising an issue that needs attention and discussion. You know, trying to not only look at our world for what it is but also start a conversation. This has been on my mind a lot lately.

It's a topic that has come up a lot in the Bible and some of the religious blogs that I read, including this one that reads:

The Bible said that we are to hold each other accountable. Where did this mentality get lost? There is a dividing line between being “judgmental” and being a concerning fellow believer. I believe that it’s all in the motive, or heart behind the correction. But is it our task to determine what someone else’s motive is? Is that not in itself a judgement? Our job is to take what has been presented to us and use it to examine ourselves. That is the way of humility…

I emphasized that last part, because it's what I truly believe when everything is said and done.

There's a fine line there, between those ... and it goes to everything we may be talking about in this world. Because really, it's just part of what we face as human beings. And then there's all the other words that come into play on this: objectivity, advise, condemn, shame, criticize... yeah, it can get a little hairy as we try to figure out the "what" behind someone's words.

Here's how I responded to Renza's post online, regarding the HCP judgment:


So often, the line between "judgement" and "accountability" gets blurred by prejudice, bias, emotion and plain old misunderstanding. What docs may see as accountability is in fact perceived as judgment, even if it wasn't meant that way. I've judged my HCPs for being judgmental, only to later find out in talking it out that's not what it was meant to be and why they said it a certain way. Once I got past my emotional response to what they originally said, it let me see things in a different light and that also changed how I felt about what they said. Interesting topic - goes so much to the human condition.

Our views are often shaped by a litany of things beyond just the words, actions or images we're exposed to.

It's a like a mixing bowl, where you start out with a recipe and add all kinds of ingredients... but sometimes, it just doesn't look like the picture. It's different. And that's what happens when interpretation varies, whether it's the amount of an ingredient in a recipe or how we think about words on a page.

We can read meaning into things that aren't really there, put words into others' mouths and interpret differently the phrases and pieces of writing we're reading.

That's just how we all roll, to some degree. 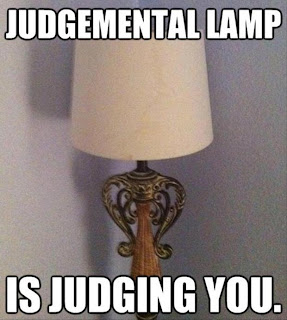 The trick is recognizing what judgment really is, and getting past our own judgments about who is or isn't judging. Basically, we're challenged to call things as they are by stepping outside ourselves a bit and looking at things differently. Sometimes, someone is just trying to raise an interesting topic for discussion. Sometimes, they're trying to start a fight. And other times, they are judging and pointing fingers.

I find myself judging at times, especially when it comes to things very close to my heart. But I am wrong, in even thinking I read something the way it was intended or how it even applied to my world. And I fall into that boat of judging incorrectly, throwing rocks at those who I thought were throwing rocks at me, but were actually warning me about those who throw rocks. So, instead of defending my glass house from rock-tossers and protecting it for the future, I ended throwing the first rock from inside and shattered the whole thing.

Therein lies the rub - as soon as we decide that someone is judging us, we are judging them. And we may be wrong. Just because we assume something is what we think it is, that doesn't make it so.

Food for thought, as always. Or as we say here in The Corner Booth: A little Coffee & Conversation for you to sip on.

StephenS said…
I know what you mean. If something I read bothers me, I try to think about it before, or if, I respond. Sometimes what initially seems like a big deal is not. Thanks for giving me something to think about.
August 5, 2013 at 12:21 PM

Carol said…
What an insightful post! "Therein lies the rub - as soon as we decide that someone is judging us, we are judging them. And we may be wrong. Just because we assume something is what we think it is, that doesn't make it so." I do think some of this is due to battle scars from poorly motivated judgement from others, but I for one feel that I have built up a wall re: diabetes that is hard for even the best intentioned people to get through sometimes. The glass house analogy is very good and I for one need to work on not doing the very thing that I'm trying to protect myself from.
August 5, 2013 at 1:59 PM

Scott E said…
Very well said, Mike. There's a fine line between suggesting someone isn't doing as well as they could and encouraging someone to do better. I find myself walking alongside that line quite often, and occasionally I misstep on or over it.
August 5, 2013 at 8:36 PM

Jane said…
This has made me think tonight and I'm sure will make me think more for the next few days. I just had a recent incident at a diabetic online board where this was an issue. It drove home the point that what one thinks is fine is viewed differently by others. Many of us do not consciously judge others, but for many different reasons, our prejudices (whether we are aware of it or not), experiences, and points of view can creep in silently and influence how we look at others (even before we are aware of it), and so quickly, we judge others. It's not easy, but we have to be aware of our own tendencies and hope that we catch our judgments quickly enough before they influence our actions
August 7, 2013 at 11:36 AM