Playing the Diabetes Card (At Disney or Life in General)

July 19, 2013
I remember standing on the school gym floor staring up at the rope I was supposed to climb. 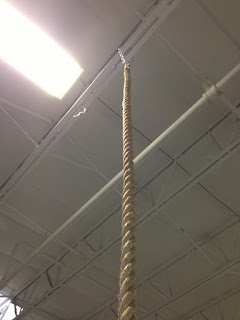 My mouth must have been wide open, as I stood gaping up at the ceiling. The top of the rope was so high up there, but for some crazy reason my 5th grade gym teacher believed we should and could climb all the way up -- just to touch the ceiling and then climb back down.

I made a choice that day, even though I knew better. Since my diagnosis before I'd even started kindergarten, I had always been taught to "not use my diabetes as an excuse." This time, however, with that rope staring back at me, I chose to claim my blood sugar was Low and I needed to sit down and have some juice. Nope, I wouldn't have to climb the rope this time.

That 5th grade experience still stands out in my mind all these many years later, and even now in my 30s I'm ashamed that my younger self made the decision to use my D as excuse. I allowed it to dictate what I could and couldn't do, and in doing so probably made others think, "diabetics can't (fill in the blank)." Of course, there's the whole fact that I was lying anyhow.

This memory and feeling came back recently when I was in Florida attending my first-ever Friends For Life conference, and the conversation shifted to how we could "use our diabetes" to get some special treatment at the Disney World and Universal Studios parks.

I heard several fellow PWDs and D-Parents talk up the advantages of having special Guest Assistance Cards (GACs), and one even said, "For the first time, I felt that I was getting something from having diabetes." In other conversations, I heard these cards referred to as "the front-of-the-line passes" and the "no-wait" cards. I've even read blogs since the conference describing them as the "go-straight-to-the-front tickets." 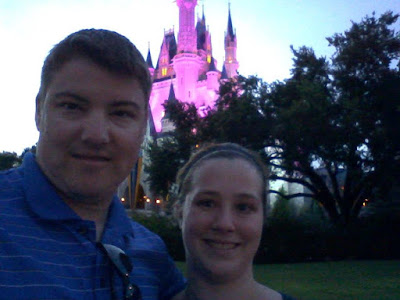 This made me uncomfortable. Honestly, I felt just like it was elementary school gym class all over again. Getting one of these passes and using it to basically cut in line felt like I was using my diabetes as an excuse -- even if I didn't need to. Just as I once indicated I couldn't climb a rope as a result of my diabetes, I was now saying that I wasn't able to adequately prepare and plan to wait in an amusement park ride line like everyone else.

Yes, I was telling people that I was disadvantaged and needed special treatment.

Now, these passes technically aren't specifically meant to cut down waits; they're meant to provide alternative entrances so that we insulin-addicts don't have to stand outside in the heat where our insulin can get easily cooked. But in learning from a park cast member that Magic Kingdom gives out 400-500 of these per day and there are probably a few thousand given out between all the Disney parks, it's pretty clear that not everyone really "needs" these passes... In fact, that's been a discussion going on within the Disney ranks about alleged "abuses" and Disney's reviewing the practice. Update: Disney tightened up that policy in September 2013.

That's not to say we PWDs are "abusing" anything just by getting one of these cards; not the argument here. I get that there's a need. Standing in long lines and walking the parks can translate into low blood sugars pretty quickly. And it's not the greatest idea to stand outside in the mid-July heat of Orlando when you have heat-sensitive insulin in tow. Whether it's in a vial you're carrying or infusing through the pump tubing in a pocket, the 80 to 90-degree direct-sunshine heat and humidity can be an issue for us. In those situations, it may be appropriate for a CWD or PWD to use one of the passes to get into an air-conditioned area to wait or to sit somewhere to wait out the lines. That's acceptable and not out of line, I think.

But even those situations don't mean a special pass is always necessary, IMHO.

Knowing that I was traveling to Orlando in July and would be spending hours at a time outdoors at amusement parks, I started planning before leaving my cooler home in the Midwest. I looked up cooling packs and options online, and finally settled on buying my first-ever Frio cooling carrying case.

This allowed me to not only cart my two insulin vials around, but to also put my insulin pump inside the Frio and attach it to my waistband for when I was out at the parks.

The carrying case was lightweight and stayed cool, even in the heat and humidity. Not too worried about my meter and other D-Supplies, I kept those in their regular case and put that in a leg pocket of my cargo shorts. It all worked out perfectly for me.

My wife and I didn't pick up a GAC, because I didn't see the need. When there were rides with wait times longer than 45 minutes, we made the decision whether or not to stick it out based on how we felt at the time. Where we willing to stand out in the heat? Or forgo that particular ride? A few times, we chose to wait in the heat. Others, we didn't. Regardless of the situation, we waited just like every "normal" person. I carried glucose tabs on me in case my BGs went Low and there wasn't quick access to anything else. This way, I felt that diabetes wasn't dictating my decisions.

OK, it's still reassuring to know that if I ever needed that special park pass, it's available. 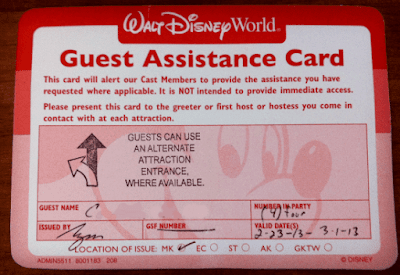 My thinking is that I'd prefer not to ask for special passes or accommodations unless it's absolutely necessary. But I don't believe they should always be used just because they can be. We have choices in how we present life with diabetes to the rest of the world.

Whether it's being able to climb a rope in gym class, or standing in line at the airport or Disney, I want the world to know that I'm not "disadvantaged" but can do most anything that "healthy" folks can do. If you don't single me out because of my diabetes and treat me with respect, I will do the same for you.

But if I do ask for help or a special accommodation, I also want you to acknowledge that there's a good reason I'm asking in the first place.

Because there's a need -- and this isn't just an excuse for me to take the easy path.

This post written by Michael W. Hoskins was originally published on DiabetesMine in July 2013.
diabetes