Spring Has Sprung For Exercise

April 30, 2013
You might say I'm excited about exercise these days.

That could very possibly be an understatement.

Not in many years have I had an exercise routine like I am currently embracing, one that I'm actually keeping up with for the

most part. Perhaps it's a symptom of the seasonal stars realigning for Spring, or maybe a guilty response to the realization that I'm so totally out of shape -- and how the mirror keeps reminding me of this. Whatever the reason, I am more of an exercise fanatic than I can recall since my teen years! 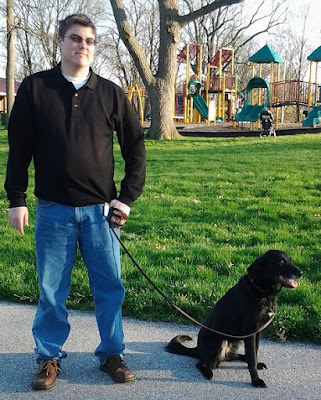 Yes, this fitness inspiration is a relatively new phenomenon for me.

But don't think I haven't thought a lot about it before. I've made those symbolic vows every New Year's, dating back a decade, to "do better" and stay more fit. Back in high school, I played sports and competitively swam -- so being lean and in shape was just the norm. As it happens, life rolled on and my college years and adult life trajectory led me away from regular exercise.

When my wife and I adopted our Riley Dog about six years ago, that was a renewed push for daily walking. But it still only happened occasionally. And when I

started here at the 'Mine a year ago and began working from home, there were some additional breaks scattered throughout the day that took me O-U-T-S-I-D-E to walk the dog. But, even then it wasn't a "regular thing."

Not until now. Maybe it's the weather, or I am just inspired by Frank Sinatra's verses that "Spring has Sprung" and I've got exercise "under my thumb."

For the past month, I've consistently walked the dog at least once a day -- missing only a handful of days because of poor weather or just not being able to sneak away. Honestly, it just helps you feel better to be outside moving around. But more than that, I have put on some pounds in the stomach recently that I'd like to lose. And feeling so out of shape just isn't a comfortable feeling...

So I've put on my walking shoes to take Riley for a stroll day after day. At least around the block for about 15 minutes, but often more around the larger perimeter of our neighborhood or even into the nearby downtown area. We have also taken her out a few times to the nearby city park, enjoying the community and taking advantage of the citywide trail system.

Just this past weekend, we took Riley to the annual Indianapolis Mutt Strut (our 4th time attending) around the two-and-a-half mile Motor Speedway, where the Indy 500 race happens. We didn't participate last year, so it was great to be back involved in this fast-paced group walk again and get some nice exercise outside with a bunch of fellow dog enthusiasts. Of course, that longer-than-usual walk led to not only a 54 mg/dL glucose level immediately after, but it also gave me a whopping blister on my right heel. So, my walking-routine may be off for a few days... darn!

But in general, my walks aren't fast-paced or intense, so I'm not breaking much of a sweat and certainly not causing blisters. Oh, and I am definitely not seeing my blood sugars dropping in any extreme way.

That's where my new biking routine comes in. I'm excited to have finally filled up my oft-deflated bike tires (after years of vowing to do this), and be pushing myself to get more intense #sweatbetes sessions into my routine. Surprisingly I haven't had any low blood sugars that have stopped me from exercising. And they say you're not supposed to exercise if you're blood sugar is above 250 mg/dL -- but that hasn't stopped me, either. Yes, I've exercised when running high. I am not in the practice of chasing my numbers and expecting any immediate dip as a result of exercise. That's not what this is all about, although it may eventually have that effect anyhow. This whole routine is about getting outside, feeling better and just getting myself into better shape. Not to tame my diabetes per se.

Still, there is a "super-charging" effect I have noticed hours after a longer and intense ride. My friend and fellow D-Peep Scott Johnson has written about this before, and I echo exactly what he's observed: that it seems the exercise keeps the insulin's effect cranking hours after I've finished the activity, and drops me down lower than usual.

At this point, I've not weaved my exercise into my blood sugar and diabetes data logging. But that's a recommendation that other type 1 exercisers often give, to take notes so that you know what impact the routine's having on your body but also to just keep track. This is something I'm going to start doing -- a new resolution! Do I have a goal? Not specifically... just to maintain the routine, get in better shape, and to have fun with whatever the exercise activity may be.

So far, walking and biking are the two main activities in my newfound zeal for exercise. I have mulled over getting back into the habit of frequenting the local city pool, as back in my teen years I was a decent swimmer for four years on the school team. But my ability to swim has all but faded away since then, and right now I can't get past the fear that I would probably sink like a stone if I tried to set foot in the water. So maybe not, at least not yet. I'm also thinking about hitting the gym at some point, maybe a couple of times a week, to bring all of this into my life even more.

All of that is to be determined, though, and for now I think it's important to simply keep up the enthusiasm for the activities I'm already committed to.