June 29, 2012
Not so long ago, I would've cringed at the idea of getting together and hanging out socially with other people with diabetes (PWDs). Seriously. Why would anyone want to wear diabetes on their sleeve or get together because of diabetes? Especially when you have to live with it every day.

But now, I crave these connections — the chance to meet up with friends, where diabetes may come up in conversation but it doesn't have to... And when it does, you know the others at the table understand. You know the sharing is all in fun and there won't be any judgment or "textbook" advice coming your way. It's a place where pumps and CGMs beep (not only yours!), and blood meters and questions about carb counts aren't outside the norm but rather the "cool thing" because everyone else has those topics on their minds, too.

That's the beauty of a D-Meetup. And it's a key connecting thread of the Diabetes Online Community, which offers lots in-person D-Meetups these days!

In that spirit, I'm incredibly proud to see a friend's international travels be based on those connections in the DOC: Simon Boots, who's touched my life and become a great friend. His story — much like so many others in the online community — is rippling out across virtual boundaries and spilling into real life, and now he's making waves by inspiring a group of fellow PWDs in Australia to build up and strengthen their country's DOC identity!

Simon came to the USA for the first time ever in October 2011, for a three-city trip dubbed "Simonpalooza." He's a fellow PWD living in Adelaide, Australia diagnosed with latent autoimmune diabetes (LADA) at age 33 (about seven years after being misdiagnosed type 2), and his visits to the U.S. are the basis for his renewed advocacy push in that country.

Simon came through Indianapolis to spend a weekend recently, one brief stop on his second visit to the U.S. in less than a year. We first had the chance to meetup in person last October at the Kansas City leg of Simonpalooza. Since then, we've kept in touch regularly by letter, Skype and the DOC and become close friends. He was returning to the U.S. for the Children With Diabetes Friends for Life conference in Orlando in early July, and when I couldn't make it, he decided to swing through Indy for a weekend in mid-June.

You might say Simon's latest trip was the DOC version of the movie "Planes, Trains and Automobiles." His flight was delayed for 8 hours out of New York, and Simon had to make his way to an Ohio airport by hitching a three-hour car ride to the Indy area from fellow stranded air travelers. I drove about an hour from my home at 4 a.m. on a Saturday to pick him up at a Meijer gas station. Yep, he was the only Australian guy standing in a dark gas station parking lot with a suitcase.

And the fun began... venturing around Indy to see the sights, chatting about everything from healthcare and careers to politics and sports in my living room, playing with the Riley dog who quickly warmed up to Simon, visiting a local farmer's market and BBQ in the county square, and just laughing. Not to mention the Diet Coke drinking! There was even a spare (plush) pancreas sitting around, and Simon got to experience an American breakfast biscuit and visit the Waffle House for the first time! It was so much better than hanging out online, via Twitter or Skype. Just being in the same room and experiencing that friendship in real life...

We then got together with a group of about 10 others, with 70% of us being PWDs who traveled from the Indy area, Northern Indiana, and even Chicago to see Simon.

There was food and fun, blood meters and CGM brandishing and diabetes device alarms. And Simon got some gifts — including a WANTED poster that we made up because of his love for tweeting musical lyrics. And our 'Mine cartoonist Mike Durbin was there, presenting one of his DOC-logo shirts that we all got to sign for Simon. 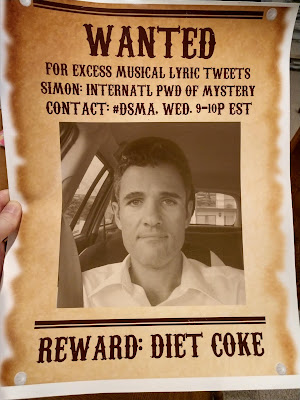 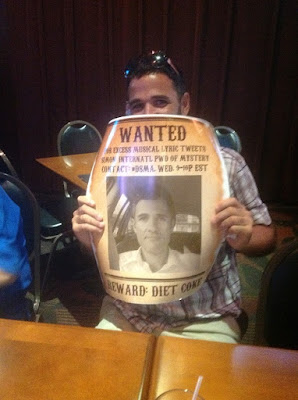 In all, it was a great time with many memories made and tangible gifts exchanged for Simon to take back to Australia, where an even bigger adventure was waiting! 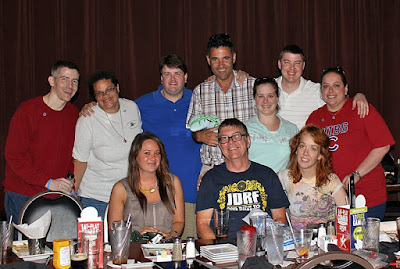 The Road to Australia

Tangible evidence of this U.S.-DOC experience is beginning to surface in Australia.

After hearing all about Simon's October 2011 visit to the U.S. via Twitter and the blogosphere, a woman named Renza Scibilia was inspired a to create a D-Meetup of her own. A type 1 diagnosed as an adult in 1998, Renza last Fall was just starting to use Twitter and discover diabetes blogs, and she found that everyone welcomed her with wide, open arms.

"I could see why Simon was so determined to get to the States and meet (and thank) in person the people who had helped him so much in cyberspace."

Renza soon attended a few DOC meetups herself — including the International Diabetes Federation's World Diabetes Congress in Dubai in December and during her own visit to the U.S. in December and January. She saw the warm welcoming as something she wanted to help recreate in her region of south Australia.

There, she says, "the online community isn't strong" — despite the number of diabetes blogs increasing almost weekly and more Aussies participating in the weekly #dsma twitter chats.

Stats from the Australian Health and Welfare Institute collected say that about 900,000 people are living with diabetes there, based on the most recent National Health Survey data from five years ago. The survey says about 10% have type 1, while about 87% have type 2. There's only a smattering of diabetes blogs online and a few diabetes-focused forums, and Simon says he's been able to connect with a limited number of people who volunteer their time helping educate fellow PWDs. On the cross-border site TuDiabetes, out of 24,500+ members, the Australian online community has about 385 members compared to the 17,000+ active from the U.S. The most active regions in D-advocacy in Australia are the south and eastern parts of the country in Melbourne, Queensland and Sydney areas, according to Renza and others.

"More and more people are showing an interest in online support, so having Simon here to share his story is important to us," Renza said. "Unfortunately online support is still regarded with some suspicion by health professionals here. Simon's story is so powerful that I hope it may help to change some of the misconceptions about online peer support."

Falling on the heels of Simon's visit to the U.S. and FFL, he went back just in time for National Diabetes Week in Australia July 9-13.  The main Aussie DOC group there had a meetup, too, with about 10 PWDs meeting to talk about what they can offer to others seeking connections. Most hadn't met before, but it wasn't at all awkward — an evening of laughter and fun, they report!

Renza is writing more about the Australian experience of the DOC and Simon's global travels at the Diabetes Australia - Vic community site, where she works. It's the leading online community and charitable organization for those with diabetes in Victoria, Australia, and apparently the only organization providing any support for type 1s there. That also led to the new DOC DSMA'ing group that uses the hashtag #OzDOC. Simon's also hoping that he can help start an Adelaide branch of the diabetes support network that is currently based in Melbourne, in hopes that he can help build some local D-support for type 1s closer to his own home. That's needed in other parts of the country, Simon says.

"There's not the same kind of community here as exists in the U.S., where it's so easy to find blogs and people online," Simon said. "But it's so needed, and the thought is if we build it, people will come. This is a big dream and we have big plans at the moment."

From this side of the ocean, it's amazing to see the international ripple effects of the DOC experience. All of these D-Meetups in the DOC are awesome to hear about, and we can't wait to see what becomes of the DOC in Australia!
Close To Home Community diabetes Diabetes Community Friends For Life DOC DSMA Blog Carnival