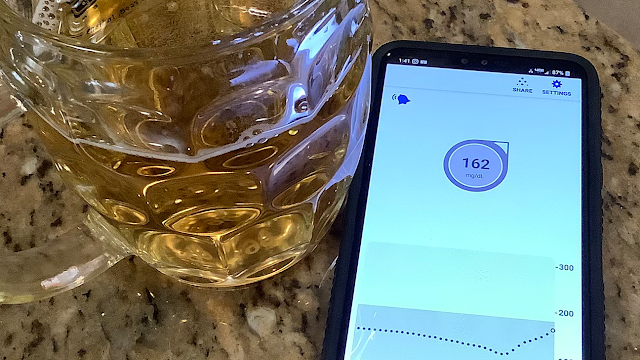 Yes, I have type 1 diabetes and I can drink beer.

In fact, I'm a craft beer lover who's pretty passionate about trying new brews and supporting my local beer makers (who invent awesomeness in a mug). The fact that I'm pancreatically-challenged changes nothing about that, except for requiring a bit more planning and awareness of how particular brews may impact my blood sugars.

Over the years, I've lost count of the times I've heard folks wonder whether PWDs (people with diabetes) are able to drink anything, particularly beer. And I've been amazed to meet medical professionals who take the lazy way out and just tell patients that any drop of alcohol is off-limits. This very directive came my way recently, from a general practitioner who clearly didn't make the cut when I was searching for a new primary care physician.

Obviously, I'm not a doctor. But in my 20+ years of legally drinking countless beers (all of them with T1D on tap, too), I would like to think I've learned a thing or two -- particularly that YES, you can and should be able to enjoy beer with diabetes if you want to, of course doing so responsibly in the context of society and your health.

For most of my life, I'd never thought too deeply about the specifics of beer influencing my diabetes management. Sure, I knew it raises my blood sugar in the short-term, and can increase my hypo risk over the ensuing hours and next day. But that's about it.

The general information available online isn't particularly helpful, either. Try searching for "beer and diabetes," or toss "blood sugar" into the Google mix, and you'll find mostly boring, cautious bits of information that are certainly not practical. You might find general info that a light beer or "regular" 12-ounce beer has a certain number of carbs, but it's quickly followed by "don't drink more than X servings and to talk to your doctor." Of course, beer affects different people in different ways, so it's all a matter of individual trial-and-error, but isn't that true for pretty much everything in the world of diabetes?

So, I decided to investigate this on my own, much like I did a while back in the "Great Coffee and Diabetes Experiment."

Let's refer to this one as: The Beer and Blood Sugar Effect.

Disclaimer: Like everyone with a working pancreas, we PWDs have to weigh the risks of alcohol consumption and take care in drinking responsibly. For us, that means carefully calculating insulin doses, while also being aware of how alcohol in general affects our blood sugar.

My curiosity on beer and diabetes piqued a couple of years ago when a conversation with a friend in the D-Community coincided with International Beer Day. That conversation evolved into talk of "best beer states," and I of course mentioned my home state of Michigan that's ranked one of the top in the country. This friend was from a state not in those rankings.

This was in late 2015 not long after we'd just moved back to Michigan after being away for more than a decade. In mid-September of that year, I began what would become a three-month, non-scientific analysis of my beer and BG effect. The home base of operations became local microbrewery Baffin Brewing Company in St. Clair Shores, Michigan. The brewery theme and logo are centered on a Burmese mountain dog named Baffin that once belonged to the head brewer, which I find awesome (those who know me and my Riley Dog can attest to my canine affection).

What's even more cool is that this brewery focuses on reuse, sustainability and being eco-friendly, and it's housed in a historic brick building that's one of the oldest in the city. The taproom walls are made from reclaimed bricks from Detroit buildings in the 1920s era and the bar itself is made from 100+-year-old reclaimed lumber.

This place is way-cool as it relates to diabetes, too. Take this example: when I wandered into the brewery thirsty to try a new microbrew pitched as a "maple syrup infused" beer, I immediately saw the sign of a good local microbrewery. With the beer sample came the warning, "Oh yeah. That 1 will raise ur blood sugar."

And did I mention that at the time they had just recently tapped a new brew called DOC?  It may be pronounced "dock," but I like to order this one by spelling out the letters, and thinking that it stands for Diabetes Online Community. Yep, this is a great place -- and it's only a half-mile from my house, so you can imagine how often I frequent Baffin. :)

Needless to say, this brewery was my home base, so to speak, for my big experiment.

Microbrews, with diabetes on tap

Between mid-September and mid-December, I examined four different types of beer and the effect they had on my BGs: a Belgian pale ale named Pope John Pale, an Irish red ale called The Walking Red, their dark imperial coffee stout named Bob Barley., and an IPA (whether it was the Don't Hop, Mosiac Moproblems, or Hopstepper double IPA brews).

For each brew, I established a baseline: no food, no Insulin On Board (IOB), no intense exercise or BG swings before the tasting began. I wanted to begin with as steady a flat line in the 80-160 range as possible.

Testing each beer had three parts:

Overall, this experiment meant 8 beers of each style -- a total of 32 beers consumed over the course of a few months. That's just over 10 beers a month, or 2 or 3 per week.

Needless to say, this took some time and effort.

It was interesting to see at times the additional effects of using the fast-acting inhaled insulin Afrezza, trying out two different CGMs (continuous glucose monitors), and playing with my insulin doses and different food factors like lower-carb, higher-fat options. I realize that these variables make my experiment decidedly convoluted, but I still felt it had value for me as an "N of 1" trial-and-error effort.

There were a number of times when I got de-railed by a lack of willpower in resisting a meal or exercise a few hours post-beer and therefore forfeited those BG results. And yes, the free popcorn at Baffin certainly didn't help and was very tough to resist!

Resources on beer drinking and diabetes

This whole process also made me look more closely at the beer-brewing process, trying to understanding how the making of different brews might play into their "diabetes effect."

Four key resources I found the most helpful came from the Diabetes Daily Grind, and a carb-calorie count list over at Beer100.com.

All helpful stuff, if I do say so myself, and a lot of this factored into my experiment.

So, what did I find?

My beer and blood sugar takeaways

The four types of Michigan microbrewed beer I tasted boosted my blood sugar an average of 75 to 115 points for each beer, without any insulin. And without insulin, my BG jumped about 100 points for just a single stout.

No matter the beer, it took about 30 minutes to start raising my blood sugar, but my levels began to smooth out within a couple of hours post-consumption. Sometimes they even started dropping.

Typical beer takes about 1.5 units of insulin for me (matched well with most carb counts of 17g or so). If I had a couple beers in one session and took 3 units stretched out over the course of an hour, I found I could stay in range, nice and steady on the CGM graph.

With a 25-minute pre-bolus, after drinking I typically see the "alcohol liver effect," which is caused by your liver being too busy processing the residual alcohol in your system to naturally release the necessary glucose needed when your BG starts to drop. As a result, you can get hypoglycemic even though the initial beer (or cocktail) may have raised your BG level. I found that my blood sugar usually starts dropping within 6 hours after drinking two or three brews. But it's not a dramatic drop, so nothing to worry about too much for me.

But this phenom was especially interesting to watch when my wife and I attended a brew festival at the Detroit Zoo and I had the chance to try about 16 small samples of various Michigan microbrews -- the equivalent of roughly 4 or 5 full-size beers. That's more than I usually have in one night (!), and I saw higher BGs immediately post-beer, but then a drop several hours later and into the following day. I'm sure the earlier low-carb dinner, all the extra walking around the Detroit Zoo played a part in that, too.

Moral of the story: advance planning is key to being able to go out and enjoy a few brews. As a PWD, you have to think hard about the type of drink you'll be imbibing, and the food and physical activity that will likely accompany it.

Overall, I learned a lot about the actual effect my favorite types of beer can have on my D-management. Now, armed with this new information, the only challenge left is to... find a microbrewery that's actually operated by a PWD. That would certainly be a taproom worth visiting!