June 28, 2019
I haven't written much here at all for various personal and professional reasons, but over the years I also haven't shared much about my eye health as it relates to diabetes. The main reason: I haven't had much to share on that point of view (eye pun, totally intended!).

This is a topic that I have visited a handful of times over the years, and amazingly each time it seems a theme is that I've gone too long in between eye health visits. And that things have gone one of two ways: Either they've changed or they haven't.

But before delving into that, let's recap my history with Dr. Eye Health (who when I first saw him in February 2016 was referred to as Dr. Eye Roll thanks to his attitude). At the time, he claimed my "eyes were perfect!" and there was no sign of any diabetes damage.

My first-ever mention of "retinopathy" came in 2007 in my mid-20s, but it wasn't at the point of needing any treatment other than just improving my D-management. (yes, I was and have been a damn diabetes medical textbook guide). Heck, my visits with Dr. Funky Eye in Indiana were an adventure. And we even learned that I had some funky eye syndrome that messed up my left eye's optical nerve and is apparently seen largely in T1D kids of moms with T1D... (winner winner chicken dinner, here!)

So once we moved back to Michigan and I heard this first claim from Dr. Eye Roll, it didn't instill confidence. But eventually, we moved past that, his name evolved to Dr. Eye Health, and all was OK between us.

The last time I saw him was March 2018 when it was time to update my glasses Rx, and all was still good to go, nothing had changed.

But now more than a year later in June 2019: My retinopathy has progressed. And apparently, it's targeted my left eye more than the right. 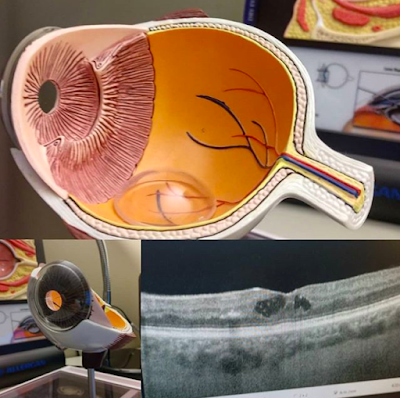 Yep, my left eye has progressed to the point of needing treatment. While my right eye has pretty much stayed the course and remained unchanged since my last appointment.

And that thought in itself scares the FUCK out of me. It doesn't even matter that my eye doc has told me this is nothing to be scared about. That this laster treatment is the effective of looking into a bunch of very bright camera flashes, 50 times over. That there isn't even a "recovery time," because it won't hurt and will be nothing too concerning. Basically, it'll seem like my eyes are dilated and light-sensitive for part of the day and then all will be peachy-keen, jelly bean.

I'm not sure I believe that. The advice seems hollow, unhelpful to make me go along with it and not panic. And I'm still scared AF. Still crying out in public over the thought of all this.

Here's what I posted on Facebook, in the hours after this news came my way:

EMOTIONAL TOLL OF D-COMPLICATIONS: So much self-blame goes into any doctor's mention of diabetes complications. No matter the reality of what is happening or needed treatments, there is primal emotional response that is nearly impossible to get over. Because you've been dreading and thinking about it since you were diagnosed with T1D as a kid. No matter the reassurances from friends who've gone through this, or doctors who are telling you what it will actually be like, there's a sense that this is exactly what you've been fearing since age 5 or when you were old enough to really process the idea of diabetes complications. Sure, the initial retinopathy dx'd a decade ago was tough but it's been pretty steady and unchanged since then, until this current left eye progression requiring lasers. No matter how not-horrible modern laser treatment may be in 2019, it's still scary and feels like the worst thing possible. But logic and rational thought is helpful, as is incredible support from the DOC + family and friends. Here's to moving forward in this 35th year with T1D.

So much mental baggage attached to this.

It all taps into that primal fear that has been a part of my brain since age 5. This has been part-and-parcel to my life for as long as I remember. That as a result of diabetes, I'll go blind. Or lose a limb.

I've always been expecting this. And despite my slacking in the context of diabetes care at different times in my life, and knowing that this shouldn't be a surprise because I've done it to myself, this is still something I've not been prepared for.

Clearly, I can get my head around this. I can realize that it's not my fault, even if I end up blaming myself for years of neglect and lack of diabetes attention that helped make me more at risk for something like this happening. I can place blame on diabetes itself. Of course.

A whole bunch of emotions to deal with as we move forward here.

Next steps: An IV dye test at the end of June, to take pictures of the retina and determine just how bad and where exactly the damage is at within my eye.

From there, a late July and eye laser procedure and possibly another in early August (which almost means I'm skipping out on a diabetes conference I had planned to attend). Oh well. This is not the painful scary lasers that hurt and burn and all that, but supposedly an easy-peasy procedure that won't really register after part of the day goes by. After that, we'll assess what's needed going forward -- possibly more mini lasers, or possibly an eye injection with a retinopathy medication, and so on.

Whatever it is, clearly my D-management must become a higher priority than it has been. I will be wearing my CGM more regularly, figure out if insulin pens/Afrezza is still the best option, and deal with my diabetes burnout in effective ways ASAP. All works in progress, as of right now.

And puns aside, I see where I'm at and what I need to do in moving forward.

UPDATE: Here's a more recent post on how that 1st retinopathy laser experience played out.

Rick Phillips said…
Having done the IV dye test and now getting my eyes checked twice a year (my request not the doctor) I get that panicked feeling when someone says retinopathy. Hell even the mere mention drove me up the wall in 1984. It still drives me up the wall in 2019.

Live your best, worry it up and in the end fight it. My mom used to say that retinopathy is the most personal complication of diabetes. So I think your reaction is both positive and normal. We fight for what impacts us personally.
June 28, 2019 at 10:03 PM

Joanne Milo said…
Mike, what an amazing and "real" post. You nailed it. I had ALL of those feelings and fears and angst. I did go through laser (in both eyes, more in the right than the left ... think T1s are more prone to right eye? :)) lots, during 1991 and then again in 1994. Then it stabilized. I have extreme and very personal anxiety during every visit to eye doc.

One thing that I did, after the very first "treatment" (which I found painful) ... went to work with a psychologist immediately to do visualization and relaxation techniques. By my second treatment, my doc asked what I had done since I was much easier to treat. And when I moved to California (actually because I figured that if I was going to lose my vision, I at least wanted to see the ocean and palm trees til then), my new doc (head of retina at UCLA, married to a naturopath and father of an acupuncturist) worked with me on my visualizations during the treatment. It was so much easier and I was just so much calmer.

I'm sending hand-holding and good spirit energy for all that you are going through. Yes, indeed, a whole f**king bundle of emotions and challenge. Thank you for all your sharing and honesty!
June 29, 2019 at 4:17 PM